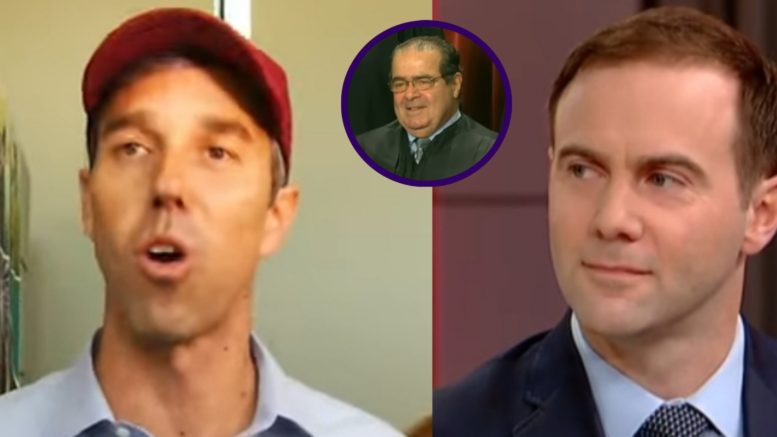 Christopher Scalia, the son of deceased Supreme Court Justice Antonin Scalia, had a few choice words for Democrat Presidential candidate Robert Frances “Beto” O’Rourke in regards to his idea of having a government “buy back” of assault weapons.

Beto reportedly told the press on Saturday that he would “implement a sweeping government buy-back policy for two types of assault rifles” if he were elected president in 2020.

A reporter asked Beto in Charlottesville, Virginia how he’d reassure people who are afraid the government would take their guns away.

“I want to be really clear that that’s exactly what we are going to do,” O’Rouke said. “If you own an AK-47 or AR-15, you’ll have to sell them to the government.”

He later tweeted that quote on Twitter, adding: “We need to buy back every single assault weapon.”

After seeing Beto’s tweet, Christopher Scalia buried the notion that the government could “buy back” guns and explained why. See Below

Scalia replied to Beto: “As others have pointed out, the phrase “buy back” is inaccurate because it implies that citizens buy their guns from the gov’t.

Related Article: Beto Says ‘We Need To Buy Back Every Assault Weapon’, Dana Loesch Levels Him: ‘Will You Use Guns To Take Them By Force?’

“For that reason, the phrasing is also a window into the progressive mind, which believes that the state is the source of *everything* you have,” he concluded. See Below

In ending, here is a fairly recent interview that Christopher Scalia did with Mike Huckabee, where he talked about his father Justice Scalia.

Mike Lindell: “I’ve Got News For Everybody…We Are Taking This Case To The Supreme Court Before Thanksgiving”