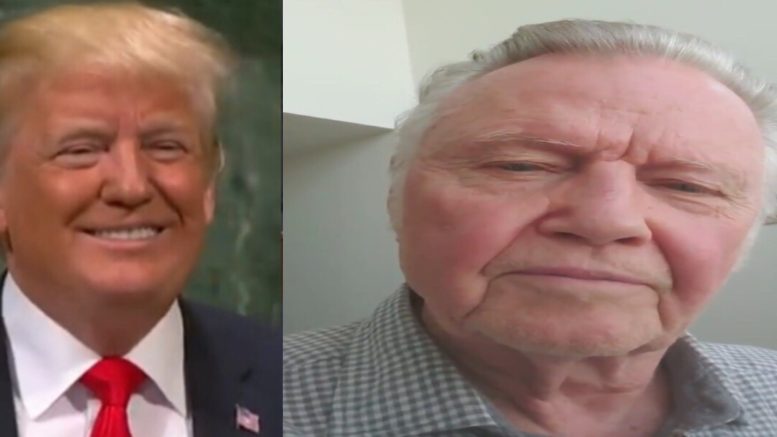 Academy award-winning actor and patriot, Jon Voight, took to Twitter on Sunday with a message of “peace and love” in a new video post.

He praised President Trump as “the greatest President of the century” and issued a message to the radical left who are “extremely angered” and filled with “hate.”

“This is not peace, this is not love, this is hate among the radical left,” Jon Voight began.

“No amount of book smart will show the given policy of what truth stands for. ‘Truth’ is a powerful motion,” he continued. “Love is what we should be voting for. And I must say, we the Republican party, have voted for renewal, for a place of safety, a community where all can have peace.”

Voight pointed out how far left the Democrat’s have gone: “But this is war among the left. They have hate. It’s like a venom. No words of God. No words of love, but a radical emotion of ‘hate,'” he explained.

“I’ve said this many times and I’m saying again: From the deep truths of my heart and soul, President Trump is a man of truths, love, and justice for the American people. And also, for the people of a sacred place, Israel,” he noted. (Continued Below)

“Not only does [Trump] love our country, the United States of America, but he has a love for the people of all nations,” Voight continued.

“President Trump is the ‘greatest’ President of this century. ‘Let us take a stand for liberty and justice for all.’ God bless,” Voight concluded. (Video Below)