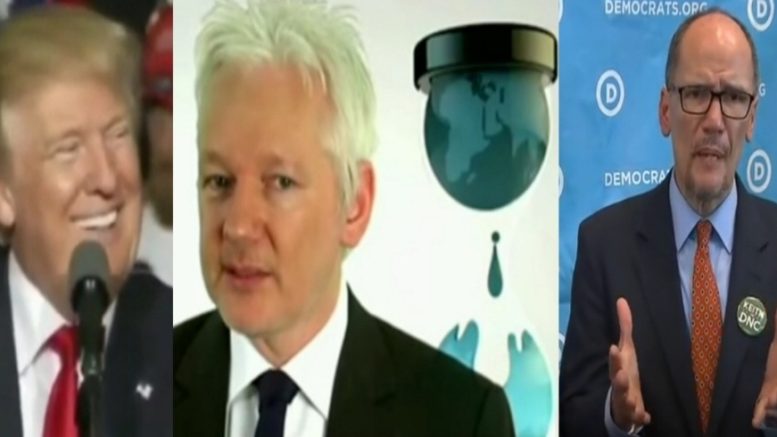 On Tuesday, a federal judge in New York dismissed a lawsuit from the Democratic National Committee that claimed the Trump campaign, WikiLeaks, and the Russian government had conspired to interfere in the 2016 election.

The DNC first filed its lawsuit in April 2018 and had filed two different and amended versions of the complaint since.

As reported by Fox News, the DNC had asserted in court filings that the Trump team’s meetings “with persons connected to the Russian government during the time that the Russian GRU agents were stealing the DNC’s information” were “circumstantial evidence” that they were conspiring with the Russians to “steal and disseminate the DNC’s materials.”

The suit did not allege that the stolen materials were false or defamatory but rather sought to hold the Trump team and other defendants liable for the theft of the DNC’s information under various Virginia and federal statutes, including the Computer Fraud and Abuse Act, Racketeer Influenced and Corrupt Organizations (RICO) Act, Wiretap Act, Stored Communications Act, Digital Millenium Copyright Act, and laws protecting trade secrets, per Fox News.

However, Judge Koeltl, sitting in the Southern District of New York, wrote in his 81-page opinion Tuesday that the DNC’s argument was “entirely divorced” from the factual record in the case, Fox News reported. (Continued Below)

Judge John Koeltl, a Clinton appointee, wrote in his ruling that the Trump officials were shielded from the allegations under the First Amendment. And he said that Russia could not be sued in the courts for the election interference but had to face actions such as sanctions instead, as per The Hill.

The lawsuit had pointed to a 2016 Trump Tower meeting among Trump campaign officials, including Donald Trump Jr. They highlighted a Russian attempt to hack a DNC back-up server one day after the meeting as potential evidence of coordination, per The Hill. (Continued Below)

The Judge ruled that while the DNC pointed to a number of contacts between Trump campaign officials and Russians, it failed to provide evidence that the figures assisted in the hacking of the Democrats’ servers. [Emphasized].

Koeltl said that he is “not required to accept conclusory allegations asserted as facts.”

Koeltl also pointed out that it is not illegal to publish or promote stolen materials, like the documents hacked from the DNC, as long as those entities were not involved in the initial hacking. [Emphasized]

“That the defendants might have used documents that had already been published by the Russian Federation and WikiLeaks is not an unlawful or improper use of the documents,” Koeltl said.

The DNC claimed the defendants illegally compromised their trade secrets contained in some of the stolen documents — including donor lists and strategies. But, the judge said, any such claim to trade secrecy was lost when the documents became public in the first place, and in any event, the newsworthiness of the matter trumped the trade secrecy issue, as per Fox News. (Continued Below)

“If Wikileaks could be held liable for publishing documents concerning the DNC’s political financial and voter-engagement strategies simply because the DNC labels them ‘secret’ and trade secrets, then so could any newspaper or other media outlet,” the judge wrote. That, he said, would elevate a privacy interest impermissibly over the First Amendment rights of people and media outlets to disseminate matters of “the highest public concern.”

President Trump responded after the judge dismissed the lawsuit writing on Twitter, “Wow! A federal Judge in the Southern District of N.Y. completely dismissed a lawsuit brought by the Democratic National Committee against our historic 2016 campaign for President.”

“The Judge said the DNC case was “entirely divorced” from the facts, yet another total & complete vindication & exoneration from the Russian, WikiLeaks and every other form of HOAX perpetrated by the DNC, Radical Democrats and others. This is really big “stuff” especially coming from a highly respected judge who was appointed by President Clinton. The Witch Hunt Ends!” he declared.

WikiLeaks additionally responded to the Koeltl’s ruling: “The DNC’s lawsuit against WikiLeaks has been dismissed, with the judge noting that the publication of the DNC emails “is plainly of the type entitled to the strongest protection that the First Amendment offers.”

The DNC's lawsuit against WikiLeaks has been dismissed, with the judge noting that the publication of the DNC emails "is plainly of the type entitled to the strongest protection that the First Amendment offers."

Gutfeld Slams Chuck Todd For Suggesting Trump Voters ‘Want To Be Lied To’: “He’s Dorian Gray Without A Painting”

Rev. Franklin Graham: “There’s Going To Be A Whole Lot More [People] Who Vote For [Trump In 2020] Because He Has Delivered”