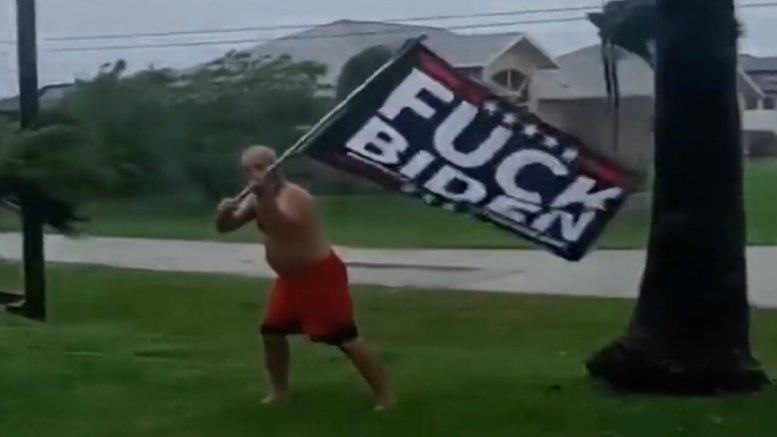 [Image: A man in Florida was seen on video holding a "F**k Biden" flag in gusty winds from Hurricane Ian "right before the eye hit" -- Twitter video screenshot.]

A man in Florida was seen on video holding a “F**k Biden” flag in gusty winds from Hurricane Ian “right before the eye hit”.

Hurricane Ian made landfall in Florida as a dangerous Category 4 hurricane Wednesday afternoon and came ashore near Cayo Costa, Florida, with winds of 150 mph.

I already know I'm an idiot but just felt the need. Taken right before the eye hit

I did it before the eye hit, we’re still hanging in there. Losing my fence my grandson’s Playhouse shingles off the roof my trees are being destroyed but so far so good inside

I​an has downgraded from a Category 4 hurricane to a Category 2 hurricane, but still packing maximum sustained winds of 100 mph.

As reported by The Weather Channel:

Ian’s storm surge has arrived along parts of the southwest Florida coast, but for most spots, surge is receding.

Extreme rainfall is also now beginning to cause flooding. More than a foot of rainfall has occurred in several Southwest Florida counties.

Winds gusted over 100 mph in Punta Gorda, Florida, for 30 minutes in the 4 p.m. hour and has continued to report wind gusts over 100 mph this evening.

Winds have recently gusted up to 128 mph in Grove City on Charlotte Harbor, 126 mph at Redfish Pass, 124 mph in Punta Gorda, 118 mph at Tarpon Point in Cape Coral, 112 mph at the Naples Grande Beach Resort, 104 mph at Venice Beach, and 107 mph near Sanibel Island. Gusts over 40 mph have been clocked on the Atlantic side, including a 54 mph gust at Cape Canaveral. Street flooding was reported in Stuart, about 100 miles north of Miami.

We were in the eye wall of Cat. 4 #Hurricane #Ian for over 5 hours and the back side was the worst.
I haven't experienced anything close to this in over 30 years @weatherchannel pic.twitter.com/wfEqcuEBAm