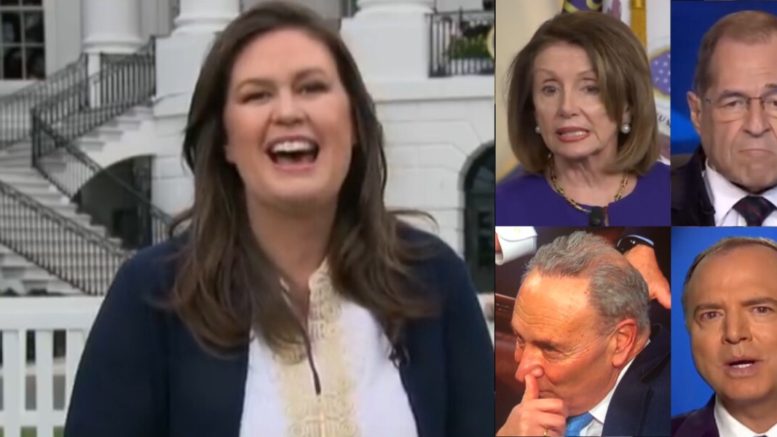 White House press secretary, Sarah Huckabee Sanders, joined “Fox and Friends” Monday morning where she weighed in on the constant attacks from Democrats towards the President who are still screaming “impeachment”.

This comes after Democrats keep losing at every turn “to get Trump” and yet, keep failing.

After Democrats framed President Trump with the Mueller investigation and that failed, they are reaching for anything to get rid of him, but the press secretary unleashed with a message of bitter reality for them.

“Democrats got beat in 2016 and they got beat because they had a bad candidate and we had a great candidate. Our candidate had a better message, a better vision and outworked his opponent.” Sanders expressed.

“They’ve been losing every day since, and they are constantly looking for excuses. They still haven’t found a message, their only option is to attack this President.” She said.

The press secretary listed off a number of reasons President Trump is succeeding and added that “we could not be doing better under this President in just two short years.” She added, “I think the country will benefit a great deal more by having President Trump for another six years.” (Continued Below)

Sanders noted that Democrats have the option to work with the President to solve some big problems, and so far, President Trump has done it on his own.

“Hopefully they’ll see that what they’re doing and continuing to attack the President is not a winning message. They should know that by now because they keep losing, and President Trump keeps winning.” She declared. “Hopefully, they see that change their ways and start to work with us, instead of against us. Frankly, the country deserves better. The country deserves better than what the Democrats are offering.”

“They’ve become not just an embarrassment for their party, but an embarrassment for public service because they are not providing the service which they were elected to actually fulfill. Hopefully, that changes, but I don’t see a lot of progress in their message at that point at all.” Sanders added. (Continued Below)

Sanders also pointed out that Democrats are sad because their “Russia collusion delusion” failed and now they have to have a conference call to figure out what they are going to do with themselves without a message.

She further responded to CNN’s April Ryan’s comments where she claimed that the press secretary’s head “should be lopped off.”

(Related: April Ryan Says Sarah Sanders’ ‘Head Should Be Lopped Off’, Mike Huckabee Swoops In: ‘Will The WH⁩ Revoke [Her] Credentials’)

“I’ve had reporters say a lot of things about me– they said I should be choked, they said I should deserve a lifetime of harassment, but certainly, never had anybody say I should be decapitated. This takes us to a new low, even for the liberal media. I think it just proves once again why this journalist isn’t taken seriously.” She said.

Sarah added that April Ryan is just looking for a few more minutes on TV but feels sorry for her and others, who have lost the collision battle, and now trying to look for anything to keep the story alive. (Video Below)