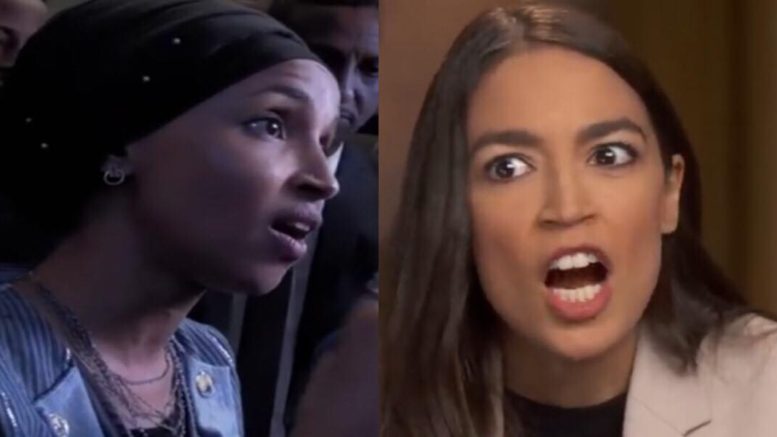 It’s official: the dumb are getting dumber.

Omar is facing massive backlash after she quote-tweeted a link to an article by Haaretz where House Minority Leader Kevin McCarthy threatened punishment against Omar and Democratic Michigan Rep. Rashida Tlaib, America’s first two Muslim congresswomen; both Omar and Tlaib have been embroiled in allegations of anti-Semitism, reported The Daily Caller.

Omar first commented on the tweet, saying “It’s all about the Benjamins baby,” and after she was pressed to clarify who she was referring to, she tweeted “AIPAC!”

Omar’s comments received swift condemnation from members of congress on both sides of the aisle, including from House Speaker Nancy Pelosi and the Democratic leadership, however, Alexandria Ocasio-Cortez praised her fellow Democrat colleage on Twitter Tuesday. (Continued Below)

“Unlike this President, Rep. [Omar] demonstrated a capacity to acknowledge pain & apologize, use the opportunity to learn [about] history of antisemitism [sic],+grow from it while clarifying her stance,” Ocasio-Cortez tweeted. “I’m also inspired by Jewish leadership who brought her in, not push her out, to heal.”

(Related: Judge Jeanine Reveals What Is Up Dems’ Sleeves & Proposes Two Choices: ‘Who Are These People?’)

Ocasio-Cortez continued, “Lots of people here proclaiming to be ‘woke’ trying to police communities on what they are/aren’t allowed to be upset by. I’m proud [Omar] raised the issue of lobbyist [money] in politics & equally proud of her sensitivity to communities. Both are possible.” (Continued Below)

President Trump on Tuesday, suggested that he believes congresswoman Ilhan Omar should either resign from Congress or at least, from the House Foreign Affairs Committee.

“I think she should either resign from congress, or she should certainly resign from the House Foreign Affairs Committee,” President Trump told members of the White House Press Pool, adding that the hateful comments are “deep seeded in her heart.”

President Trump also said that her apology was lame and that she didn’t mean a word of it, further noting that it was just not appropriate.

Lots of people here proclaiming to be “woke” trying to police communities on what they are/aren’t allowed to be upset by.

I’m proud @IlhanMN raised the issue of lobbyist 💰 in politics & equally proud of her sensitivity to communities. Both are possible.https://t.co/Jq2Y1txFCS

(Related: Graham Knocks Ocasio- Cortez’s Notion That The World Will End In 12 Years Out Of Orbit)