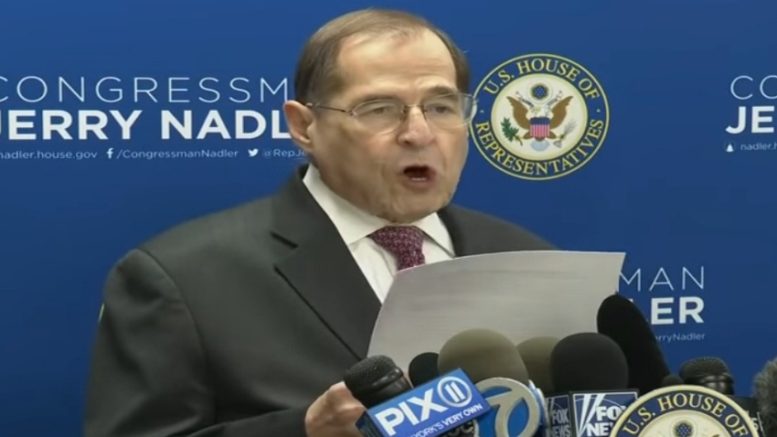 House Judiciary Committee Chairman Jerry Nadler, (D-NY) announced on Thursday that he plans to issue a subpoena for the full, unredacted version of Special Counsel Robert Mueller’s report, while also blasting Attorney General Bill Barr for not giving Congress such a copy from the start.

This comes after the release of the report from the DOJ and again– no obstruction, no collusion. If anything, President Trump obstructed “injustice.”

Democrat lawmakers on the Hill pounced at the opportunity to grandstand after the release of the report, in turn, looking for anything to attack the President. They don’t care about the “Russia” claims, rather, they’re more concerned about “obstruction of justice” to drum up their base for 2020.

Nonetheless, Jerry Nadler held a press briefing and claimed that the redacted version of the report “outlines disturbing evidence” that President Trump engaged in misconduct and possibly obstructed justice.

“The attorney general deciding to withhold the full report from Congress is regrettable, but not surprising,” Nadler said during a press conference. “Even in its incomplete form, the Mueller report shows disturbing evidence that President Trump obstructed justice.”

He also took swipes at the Attorney General claiming that he is protecting the President. “Barr’s words and actions suggest he has been disingenuous and misleading in saying the President is clear of wrongdoing. (Continued Below)

“I have formally requested that the special counsel Mueller testify before the House Judiciary Committee as soon as possible so we can get some answers to these critical questions, because we clearly can’t believe what Attorney General Barr tells us.” He whined.

After reading off his Democrat talking points and the “Trump smears” he took a few softball questions. (Continued Below)

Nadler would not say whether or not congressional Democrats would file articles of impeachment against President Trump, but added that he was not taking the option off the table.

“Congress must get the full, unredacted report along with all the underlying materials from Special Counsel Mueller. We have to get to the bottom of this and take whatever action seems necessary and we’ll see what happens.” Nadler said.

“If you go towards impeachment, how important would this report be? Do you think this provides a roadmap?” Asked by the liberal press.

While trying to come up with something clever on his fishing expedition, Nadler responded, “Well, it’s too early to talk about that. We will have to go follow the evidence where it leads. I don’t know exactly where it will lead, if I did know, I wouldn’t need all of this information. But, I think it was probably written with the intent of providing Congress a roadmap.” (Video Below)

It appears when Democrats don’t get their way, they choose to lash out and attack people, instead of moving forward. We see that as now they are shifting their blame on the Attorney General. Pathetic.

(Related: Reporter Asks Why Mueller Isn’t At The Press Conference, Barr Fires Back: ‘It Was A Report He Did For Me’)