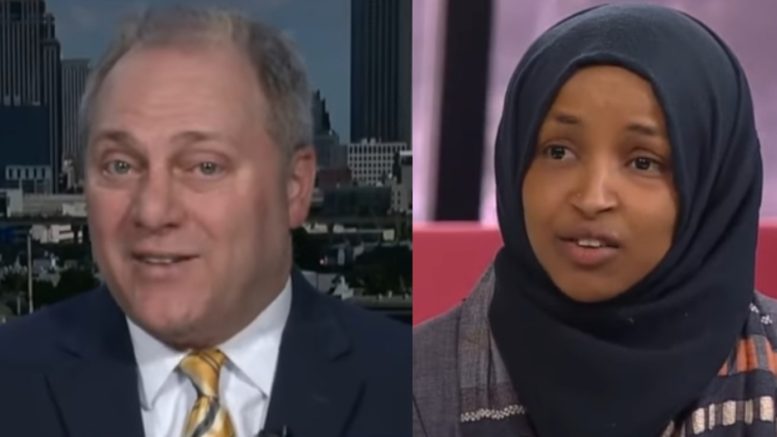 Ilhan Omar received scrutiny from both sides of the aisle after lashing out at Republicans over their support for Israel. She claimed in tweets that Republicans only support the Jewish state because they are paid by AIPAC to do so, saying “It’s all about the Benjamins, baby.”

Republicans immediately condemned the freshman representative over her remarks, while high-ranking Democrats followed suit and labeled her words as anti-Semitic.

After speaking with House Speaker Nancy Pelosi and being scrutinized by other Democrats for her remarks, Omar apologized.

Despite condemning Omar and declared there is no place for anti-Semitism, Democrats are now being pressed by Steve Scalise to take even further action to prove they’re serious about their stance.

Scalise is worried that the reaction from Democrats is nothing but hot air, as he pointed out that Omar is still a member on the Foreign Affairs Committee.

Scalise is now pressing Democrats to consider removing Omar from the Foreign Affairs Committee, in light of her remarks.

Related Article:  Sarah Sanders Signals Crunch Time For Dems: ‘Will They Decide They Love Our Country More Than They Hate This President?’

In a statement released on Twitter, Scalise said, “Good that some Dems have condemned the disgraceful anti-Semitic remarks of Rep. Omar—but their words are empty unless Dem leaders remove her from the Foreign Affairs Committee. No one with her anti-Semitic views should be allowed to represent US foreign policy on that committee.” See Below

Good that some Dems have condemned the disgraceful anti-Semitic remarks of Rep. Omar—but their words are empty unless Dem leaders remove her from the Foreign Affairs Committee. No one with her anti-Semitic views should be allowed to represent US foreign policy on that committee.

Will Democrats follow advice from Scalise and boot Omar from the Foreign Affairs Committee? Time will tell!

We leave you with a couple more reactions to Omar’s remarks.

So sick & twisted. This continued anti-Semitic trope from Omar is grossly wrong. There should be NO home in US politics, college campuses, or halls of Congress for ANY of this garbage. Now she tweets that if Members of Congress support Israel then they were bought off by Jews.👎 https://t.co/jJMplUNCqd

To see this at the UN was a fight every day. This CANNOT be tolerated in our own Congress by anyone of either party. In a time of increased anti semitism, we all must be held to account. No excuses. ❤️🇺🇸 #NoSpaceForHate#NoToleranceForAntiSemitism #WhatIsHappeningWithPeople https://t.co/zUaNjp3hHo