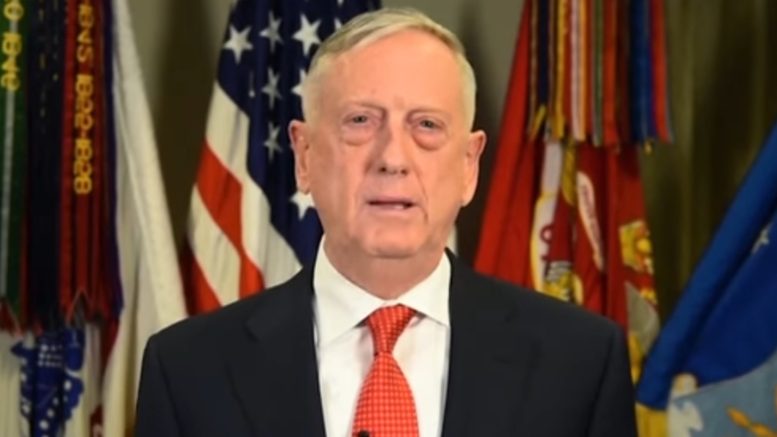 Secretary of Defense General Mattis, also known as ‘Mad Dog’ is set to retire and his date of departure has been moved to January 1st from February 28th.

Prior to his departure, Mad Dog assisted with and has signed off on the plan to withdraw from Syria. Additionally, from the Pentagon he penned a farewell letter to the troops that is very powerful.

President Trump worked through Christmas and so did General Mattis!

Brietbart reported, the “outgoing Defense Secretary Jim Mattis reportedly spent Christmas Day working at the Pentagon, with only a week to go before Acting Secretary Patrick Shanahan takes over on January 1, as ordered by President Donald Trump.”

Then in a powerful and wisdom filled letter, the Defense Department posted Mattis’ “Holiday Message 2018” for the troops.

In typical Military style, the letter was addressed to “all subordinate commands” and was posted on twitter Christmas Eve. (Video below.)

‘We in the U.S. military are privileged to defend America, especially at this time of year, for we ensure our fellow Americans celebrate this season of hope in peace and safety.

We know our freedoms are not guaranteed by themselves; they need defenders.

This month, many in our military will be serving far from their loved ones. It is difficult work, but this is nothing new; since Washington crossed the Delaware on Christmas Day in 1776, American troops have missed holidays to defend our citizens’ experiment in democracy. (Continued below.)

To those in the field or at sea, “keeping watch by night” this holiday season, you should recognize that you carry on the proud legacy of those who stood the watch in decades past. In this world awash in change, you hold the line.

Storm clouds loom, yet because of you your fellow citizens live safe at home. Most don’t know your names but all are confident their freedoms and their families will be kept safe.

Far from home, you have earned the gratitude and respect of your fellow citizens and it remains my great privilege to serve alongside you.

Merry Christmas and may God hold you safe.” (Video below.)

Watch General Mattis as he sends last Christmas message to the trooops!

Sen. Graham Swipes Back At Mattis Over His Criticism Of Trump: “It Is So Fashionable To Blame Trump For Every Wrong In America”