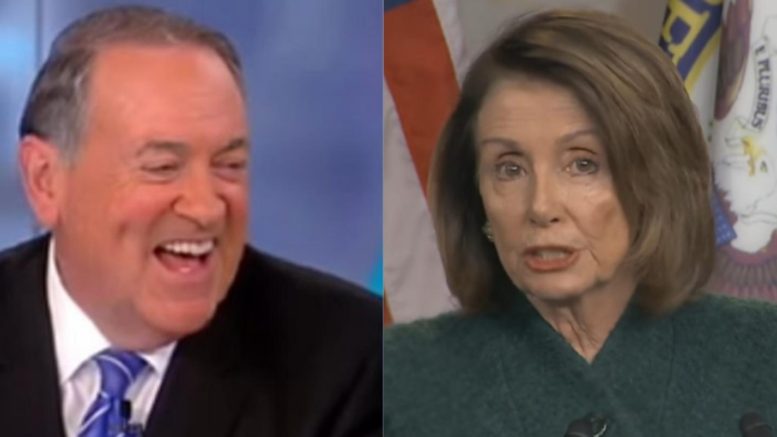 Mike Huckabee tweets hilarious suggestion on how to end the partial government shut down.

Governor Mike Huckabee has been around D.C. politics for decades and he has forgotten more than others ever knew about things that have happened in D.C.

And he proved it with his brilliant suggestion. Huckabee tweeted a hilarious idea to President Trump on how the partial Government shut down could re-open…quickly. (More below.)

Mark Meadows who was fresh out of the negotiation said the “sticking point” was Nancy Pelosi. He said that she was actually the “the Minority Leader in the Senate” and not Chuck Schumer because he constantly had to check with her.

Huckabee noted the Pelosi-Schumer decision to shut down “the government (or certain non-essential parts of it)” is because the “Senate Democrats refused to pass a temporary funding bill because it included $5.7 billion to build a security wall on our Southern border.”

“If you needed any explanation to make it clear why the government is shut down,” Huckabee continued and provided the direct quote from Schumer.

Schumer said: “It will never pass the Senate, not today, not next week, not next year. So President Trump, if you want to open the government, you must abandon the wall, plain and simple.” (More below.)

Mike Huckabee comes up with a hilarious way to re-open the Government and fund the Wall!

In light of the Government shut down “because Democrats absolutely, positively refuse to fund a border wall – something that Presidents and Congress members of both parties have repeatedly claimed to back for about 30 years, up until Trump actually wanted to keep their promise and now they’re outraged,” Huckabee said then tweeted a suggestion for the President to re-open quickly!

With Huckabee’s epic sense of humor he tweeted directly to the President, “…to end impasse w/ Chuckie and Nancy over wall: Tell Nancy that she won’t get Air Force planes to/from home like last time she was Speaker until we get full funding for wall. Deal should be made in about 15 minutes.”

Related Article: Meadows, Jordan & Gaetz Posture Themselves Ready To Fight: ‘It’s A Fight Worth Having For American Families’

Suggestion for @realDonaldTrump to end impasse w/ Chuckie and Nancy over wall: Tell Nancy that she won't get Air Force planes to/from home like last time she was Speaker until we get full funding for wall. Deal should be made in about 15 minutes.