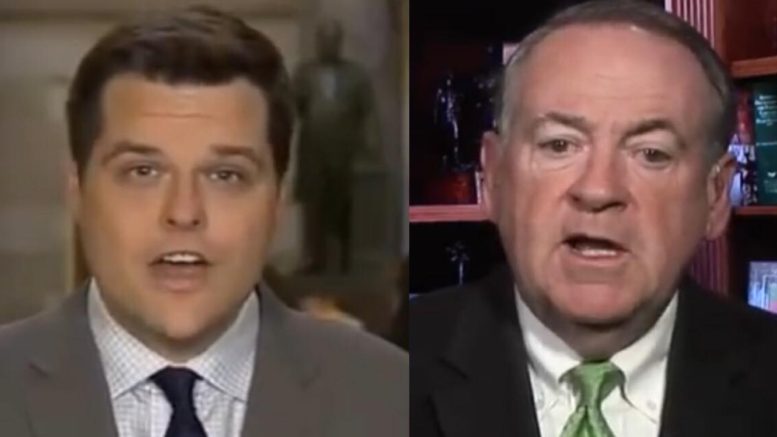 Rep. Matt Gaetz (R-FL)  joined Harris Faulkner on Fox News right after the announcement came out that President Trump pushed back and will not sign a bill without funding for border security.

Gaetz gets it, and he’s fighting for the American people. (Video Below)

Thursday on “Outnumbered Overtime,” Rep. Matt Gaetz said Senate Republicans must stand behind the party’s promises on border security. He added the House can and should pass $5 billion for the border wall and send it to the Senate.

“I don’t care if every Senator and Congressman has to cancel their Christmas, we’re gonna stay here, we’re gonna work, and we’re gonna make sure we give every effort to deliver on this promise, that not only the President made, but many Republicans made before our voters.” Gaetz announced.

“I think the President could conceivably say, ‘nobodies going home, every body is staying to work. We will reopen the government in January so there’s an end game, but until that time, I don’t think we’ve seen our best effort yet.’ Gaetz added, “Sometimes we do our best work when the expectations are the lowest, and they’re pretty low right now.”

Gaetz said the President’s allies in Congress are ready to defend him if the government shuts down and the Democrats and media label it the “Trump shutdown.” (Video Below)

“This president was sent here to make changes and I’m proud that even on the eve of Christmas, he’s still trying and still fighting and we ought to have his back. … We’ve got to actually fight,” Gaetz said, accusing Senate Republicans of trying to “kick the problem down the road” again on border security.

The Florida representative also tweeted, “Do we actually think we’re going to get a better deal from Nancy Pelosi when she’s Speaker of the House? This is the time to fight. This is our last chance to get the president his wall because we won’t be able to get it w/out a 7M person amnesty package when Pelosi is speaker.

Former Governor Mike Huckabee caught wind of Matt Gaetz’s message where he praised him on Twitter and wrote, “Just saw my Congressman @mattgaetz brilliantly explain why he’s standing w/ @realDonaldTrump to not sign CR w/o border security. Glad that some aren’t going to get rolled like a burrito and smoked like a fajita by Chuck and Nancy!” (Video Below)

Official Tweets and Video below:

The President also wrote on Thursday, “When I begrudgingly signed the Omnibus Bill, I was promised the Wall and Border Security by leadership. Would be done by end of year (NOW). It didn’t happen! We foolishly fight for Border Security for other countries – but not for our beloved U.S.A. Not good!”

Gaetz gets it. Watch below:

(Related Article: Jordan Just Torched Lawmakers For Being Spineless On Wall Funds: ‘The People Are Sick Of The Games”)