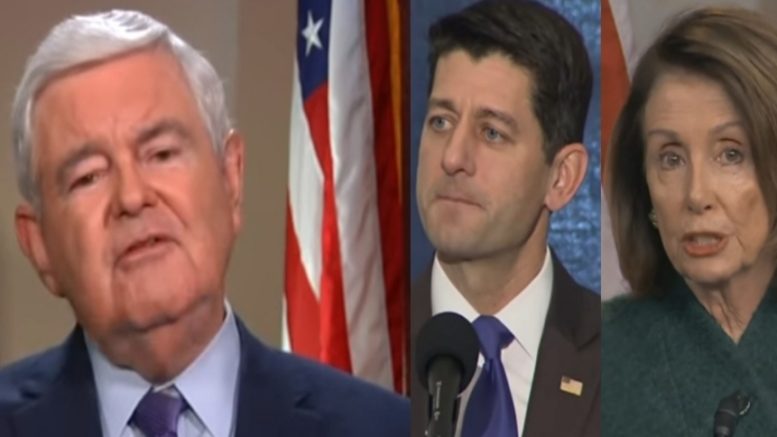 Newt would like to see transparency in the House. Photo credit to The Freedom Times compilation with screen shots.

Two years ago, the Democrat congress was embroiled in a House IT scandal involving Imran Awan who was caught manipulating House data and  sending money to Pakistan.

Awan has since plead guilty to the money exchange with Pakistan yet, New Gingrich, former Speaker of the House, wants more transparency on the unanswered questions. (VIDEO BELOW.)

Newt calls out the current Speaker and Speaker-designate to dig back into Awan’s illegal activities.

Newt has sent a letter to the House leaders and wants the answers for the American people.

In a tweet with the letter attached, Newt said, “Today, I sent this letter to Speaker Ryan & Speaker-designate Pelosi regarding the serious questions surrounding the Imran Awan investigation, challenging them both to uphold their promise of an open, transparent Congress that is held directly accountable to the American people.”

In the opening statement of the letter, Newt said, “the allegations surrounding crimes committed by former House IT employees and the potential cover-up of an negligence toward addressing such crimes, is profoundly disturbing.”

Considering that Awan had access to House member’s digital information, equipment and National secrets, Newt believes the Obama-era FBI and DOJ “avoided conducting a thorough and meticulous investigation.” (VIDEO BELOW.)

Newt outlined that Awan and his team were on the payroll of over 40 House members so the few interviews could not be considered thorough or even in “good faith”.

Additionally, in one interview with the Obama-era FBI, a witness was not allowed to bring supporting documents of potential wrongdoing.

Newt said, “which have led me to question the thoroughness of the investigation and the accuracy of the conclusion.” Newt wants to see the case reopened and challenges Pelosi to keep her word of a “transparent” Congress. (VIDEO BELOW.)

Watch the video of Newt’s letter and Newt’s tweet below:

Rep. Boebert Erupts On House Floor: “My Colleague…Slept With Fang-Fang, A Chinese Spy…Sleeping With The Enemy”