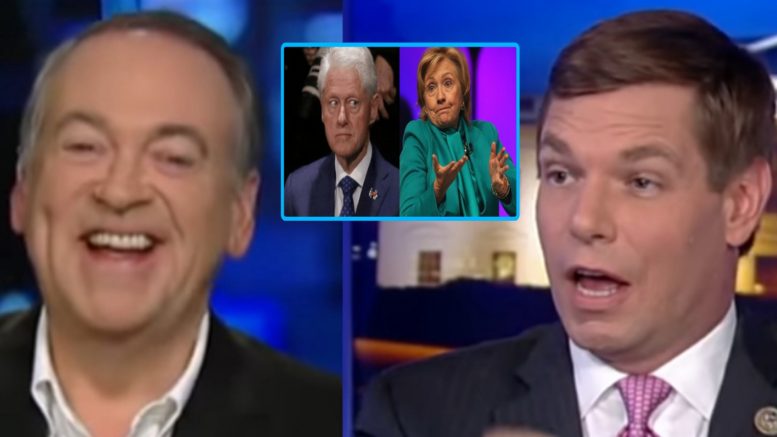 Mike Huckabee points out the double standard in President Trump dissolving his foundation. Photo credit to The Freedom Times compilation with screen shots and Twitter.

President Trump did not have to give up his lifestyle and philanthropic works to become President of The United States to fight for the American people against globalism. But he did.

Eric Swalwell, the Democratic California congressman tweeted an insult at the President to start a false narrative.  Mike Huckabee, swatted Swalwell back and crushed him with logic. (MORE BELOW.)

President Trump dissolved his Foundation on the heels of attacks by New York Democrats.

President Trump in his complete transparency is setting the record straight. His Foundation is dissolving by his choice.

The implication from Swalwell is that the President ran a pay-for-play operation through his Foundation like Clinton. He did not. He did have some possibly questionable “write offs” like a 7$ cub scout fee for his grandson and a fountain repair at Trump Tower, according to the left-wing magazine The New Magazine. However, that is nothing like Clinton’s pay-for-play schemes.

Trump tweeted, “The Trump Foundation has done great work and given away lots of money, both mine and others, to great charities over the years – with me taking NO fees, rent, salaries etc. Now, as usual, I am getting slammed by Cuomo and the Dems in a long running civil lawsuit started by…..

…sleazebag AG Eric Schneiderman, who has since resigned over horrific women abuse, when I wanted to close the Foundation so as not to be in conflict with politics. Shady Eric was head of New Yorkers for Clinton, and refused to even look at the corrupt Clinton Foundation.”  (MORE BELOW.)

Democrats try to use the story to run a false narrative. Mike Huckabee puts them in check.

Swalwell, who often runs with the Democratic narrative said, “Turns out there was a presidential candidate running a corrupt “charity” foundation. Good thing it was dissolved today.”

The Democrats are known for the Goebbel approach that Swalwell used. Accuse the other side of what they are guilty for! It didn’t work though.

Huckabee pointed out the obvious when he tweeted, “Oh my! Did the Clinton Foundation finally get shut down for selling govt favors to the Russians and anyone else with a checkbook?”

While Facing Her Father, Sarah Sanders Unveils The Plan To Keep Reporters’ Conduct In Check