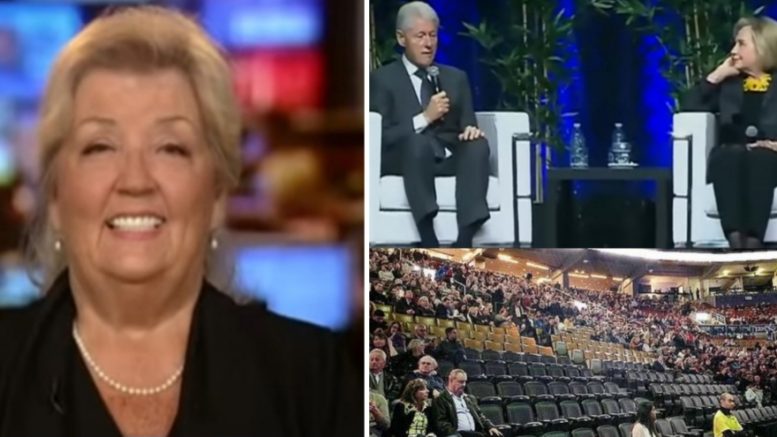 Bill and Hillary are still selling themselves to talk in front of an audience. Apparently, talk is cheap. This time, the Clinton couple had to head to our northern neighbors to turn a dollar.

The “size” of the crowd left little to be desired – even in Canada. So the rape victim of Bill Clinton tweeted a GREAT response to their empty seat conundrum. (MORE BELOW.)

Crowd size matters and Juanita Broaddrick has an amazing solution for the crooked pair in Texas!

Zerohedge reported, “Having seen donations to their ‘foundation’ collapse by 90% since they failed in their bid to regain The White House.”

“The Clintons decided a 13-city paid speaking tour was in order to scrape together some coin,” Tyler Durden wrote.

The Daily Mail then headlined with, “The Bill and Hillary show! Power couple kick off 13-city paid speaking tour in CANADA where bank executive lobbed questions at them in half-empty arena, as they accuse Trump of being part of a Saudi ‘cover-up’.”

See the empty seats below in blue at the arena Bill and Hillary spoke at in Canada. (MORE BELOW.) 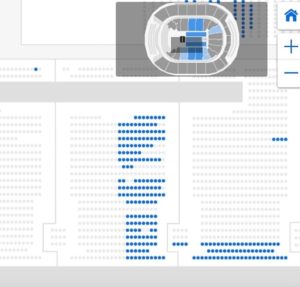 “ROOM FOR MORE! There were blocks of open seats available hours before the event, but organizers said about 3,300 tickets got sold.” – DM. Photo credit to the Daily Mail.

No sooner had the news broke about the empty arena did Juanita jump in! In an epic tweet, Juanita Broaddrick wrote, “Canada not welcoming to Clinton Tour with 83% of seats empty last night in Toronto.“

Juanita then told where their next speech is suppose to be and said, “Next is Sugar Land, TX, Dec 4th. LET’S SHUT THESE CROOKS DOWN, Texas, with 100% empty seats.” Good plan! What do you think of it?

Canada not welcoming to Clinton Tour with 83% of seats empty last night in Toronto. Next is Sugar Land, TX, Dec 4th. LET’S SHUT THESE CROOKS DOWN, Texas, with 100% empty seats.

Report: U.S. Truckers Preparing to Form a Convoy That Will Travel From CA to Washington D.C.