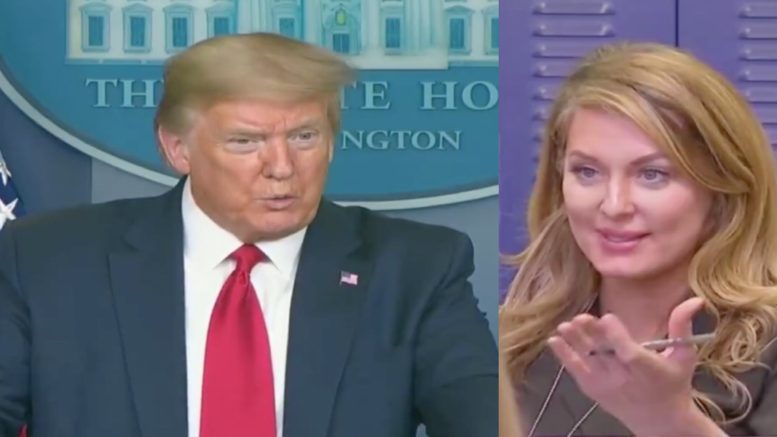 Both the United States and Canada have sent money to the Wuhan Institute of Virology, the Chinese lab that is suspected of being the likely source of the coronavirus pandemic — with the Canadian funding coming as recently as last month, Fox News reported.

During Friday’s Coronavirus Task Force briefing, President Trump was asked about a report pertaining to the National Institutes of Health, under the Obama administration, which may have played a part in funding the Wuhan Lab in China, where the Coronavirus is reported to have come from.

In a news release from early March, the Canadian Institutes of Health Research announced millions in funding to research and develop tools such as vaccines and tests to combat the coronavirus. One project that got $828,046 from the agency was aimed at developing a rapid coronavirus test “using isothermal amplification and CRISPR technology.” Among the organizations on the project was the Wuhan Institute of Virology.

“The collaborative research is conducted by a multi-disciplinary team of virologists, chemists, infectious disease specialists, front-line practitioners, and public health researchers from the University of Alberta, Canadian Food Inspection Agency, and Wuhan Institute of Virology (China),” a backgrounder detailing where the Canadian government’s grant money was going reads. “Our team members in Wuhan who currently perform the standard diagnostic tests will lead this effort.”

The Canadian news site Rebel News first reported on the grant. Continued Below

This comes after recent reports, including from the Daily Mail, of millions of dollars in U.S. government grants funding research conducted at the Wuhan Institute of Virology in recent years, news that has upset multiple members of Congress.

According to public documents compiled by the White Coat Waste Project and shared with Fox News, The Wuhan Institute of Virology has been involved with research funded by $7.1 million worth of U.S. government grants from the National Institutes of Health as it has participated in projects in collaboration with U.S. institutions. One grant for research on bat coronaviruses has received $3.7 million and another grant involving injecting viruses into mice’s brains got $3.4 million.

It is not clear exactly how much U.S. funding went directly to the Wuhan Institute of Virology because it worked in collaboration with other institutions on the projects funded by the American grants. Continued Below

A reporter had asked the president Friday during the Task Force briefing: “U.S. intelligence is saying this week that the coronavirus likely came from a level 4 lab in Wuhan. There’s also another report that the NIH under the Obama administration in 2015, gave that lab 3.7 million dollars in a grant. Why would the U.S. give a grant like that to China?”

President Trump responded: “The Obama administration gave them a grant of 3.7 million? I’ve been hearing about that. We’ve instructed that if any grants are going to that area, we’re looking at it literally about an hour ago, and also early in the morning. We will end that grant very quickly, but it was granted quite a while ago. They were granted a substantial amount of money. We’re gonna look at it and take a look, but I understand it was a number of years ago.”

“When did you hear the grant was made,” the president asked the reporter, to which she responded, “2015.”

“Who was president then? I wonder,” the Commander in Chief said. Video Below

President Trump asked about reports that the Obama Administration gave the Wuhan Lab where Coronavirus may have come from a $3.7 million grant. pic.twitter.com/4vNkO6EKpl

Rep. Matt Gaetz (R-FL) spoke out against the U.S. funding of the Chinese institute, most recently in an appearance on Fox News’ “Tucker Carlson Tonight” this week.

“I’m against funding Chinese research in our country, but I’m sure against funding it in China,” Gaetz said. “The NIH [National Institutes of Health] gives a $3.7 million grant to the Wuhan Institute of Virology, [and] they then advertise that they need coronavirus researchers and following that, coronavirus erupts in Wuhan.”

At best, Americans are funding people who are lying to us.

At worst, we’re funding people who we knew had problems handling pathogens, who then birthed a monster virus onto the world. pic.twitter.com/0ASWpe6vzQ