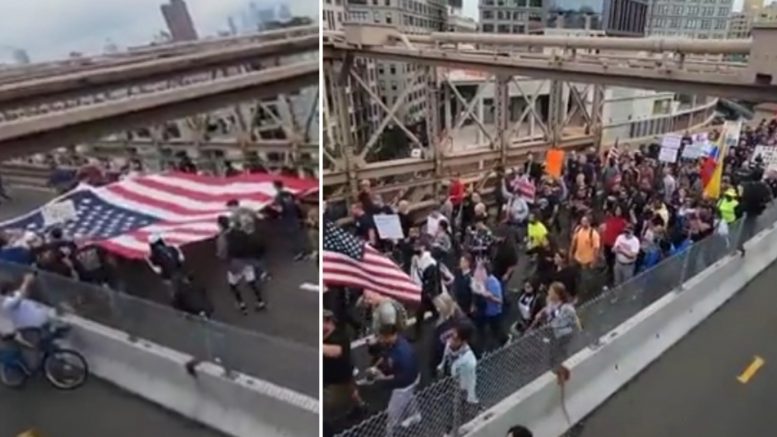 New York City public service workers came together by the masses to send a message in opposition to the stringent coronavirus mandate that was recently handed down by the local government.

“Last week, Mayor Bill de Blasio announced that regular COVID-19 testing would no longer be an option in lieu of vaccinations and that city employees, including first responders, would have until October 29 to get at least one dose of the vaccine,” according to Newsweek.

As reported by ABC7 New York

The protest was set to end in front of City Hall on the Manhattan side of the bridge and was billed as an anti-mandate protest on behalf of nearly 50,000 NYC employees who have yet to be vaccinated.

Thousands of demonstrators poured over the Brooklyn Bridge — from police officers to firefighters, to sanitation workers, paramedics and public schoolteachers.

Some were vaccinated, some were not. All of them were opposed to mandated vaccinations for municipal workers in New York City.

Protesters said they’re determined to defy the city’s vaccination mandate requiring that anyone who receives a paycheck from the city show proof of vaccination by 5 p.m. Friday or be placed on unpaid leave.

A video of the historical moment uploaded by Breaking 911 as seen below:

‘HOLD THE LINE’ – Thousands of NYPD, FDNY & other city workers march across Brooklyn Bridge in protest of city’s vaccine mandate

In ending, here’s a followup letter from NYPD’s largest union related to their lawsuit that reportedly was filed in Staten Island state Supreme Court:

Anti-War Protesters Confront Rep. Ocasio-Cortez At Town Hall Event: ‘You are the Establishment’

Cuomo Threatens To ‘Displace’ De Blasio & Bring In National Guard: “NYPD & The Mayor Did Not Do Their Job Last Night”