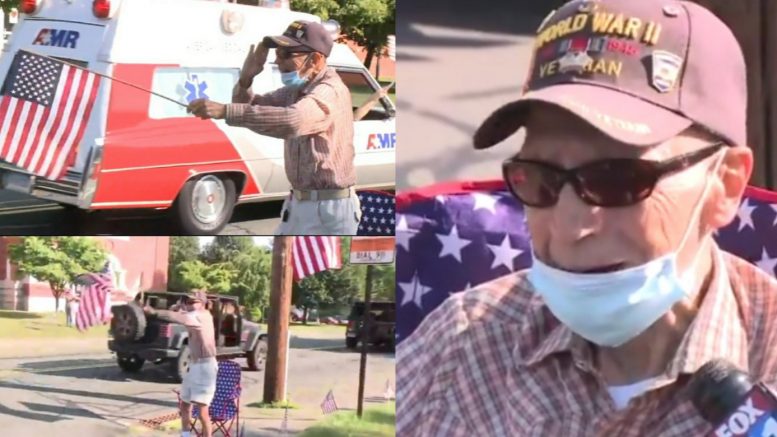 A 95-year-old World War II veteran got the surprise of his life on Saturday as area residents in Torrington, Connecticut showed overwhelming gratitude for his services and the American flag.

Veteran John Mostracola was greeted by dozens of cars with American flags at the corner where he sits every day. Patriots in vehicles honked their horns, waved to him and thanked him for his service as they drove by and as he waved his American flag back at them while saluting.

The organized surprise was carried out in response to a news story by local news station FOX61, who did a recent special report in regards to Mostracola sitting at the corner every day, if he can, to show the importance of the flag and the importance of what he did in the war.

In reaction to the unparalleled show of respect, John said, “I can’t put it into words. All of my efforts are paid off. There are nice people.”

“We can not surrender,” he added. “Never surrender, never! I don’t give a damn what goes on, I won’t surrender.”

“We can’t give in,” Mostracola continued. “I’m dying. I’m dying of cancer. I’m less than 100 pounds. But before I go, I will [leave] those two words to you: Never, never, never surrender to these…son of a guns. Because that’s what’s happened with Pelosi, Schumer, Blumenthal.” Video Below

Biden Misconstrues Afghans Falling Off Of C-17: “That Was Four Days Ago, Five Days Ago”