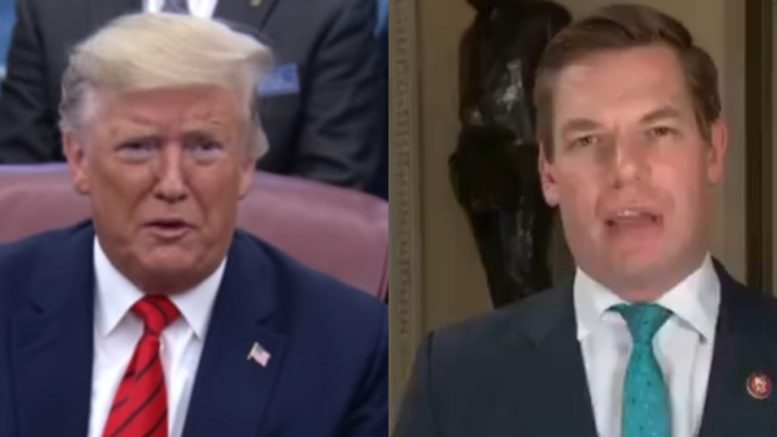 On Wednesday, Congressman Eric Swalwell spoke out against the decision by the DOJ to recommend a lighter sentence for Roger Stone than was initially proposed by prosecutors handling the case.

In his remarks, Swalwell suggested the DOJ may have been influenced by President Trump’s tweet, and he signaled that impeachment over the scenario is not “off the table.”

Related Article: Swalwell Asks Public For ‘Evidence That Can Get Rid Of Trump’ Amid The Trial, Dean Cain Reacts: “Desperate?”

Swalwell was referring to President Trump’s reaction to news of prosecutors’ initial sentencing recommendation of up to nine years for Stone, when he tweeted, “This is a horrible and very unfair situation. The real crimes were on the other side, as nothing happens to them. Cannot allow this miscarriage of justice!”

In regards to Trump’s tweet, Swalwell said the President “indirectly” signaled what he wanted to happen with Roger Stone’s sentence, and “by tweeting out that, Attorney General Barr got the message.”

Host Jake Tapper asked, “Might you impeachment him over this, over Roger Stone and the sentencing?”

Swalwell replied, “You know, we’re not going to take our options off the table. We don’t wake up in the morning wanting to impeach him.”

He continued, “We want to work with him on prescription drugs, background checks, and infrastructure, but we’re not going to let him just torch this democracy because he thinks that he’s been let off once and we’re not going to do something about it.” Video Below

“We’re not going to let him just torch this democracy because he thinks he’s been let off once.” https://t.co/ZSWutdgfmg pic.twitter.com/9wWlQi6Xrk