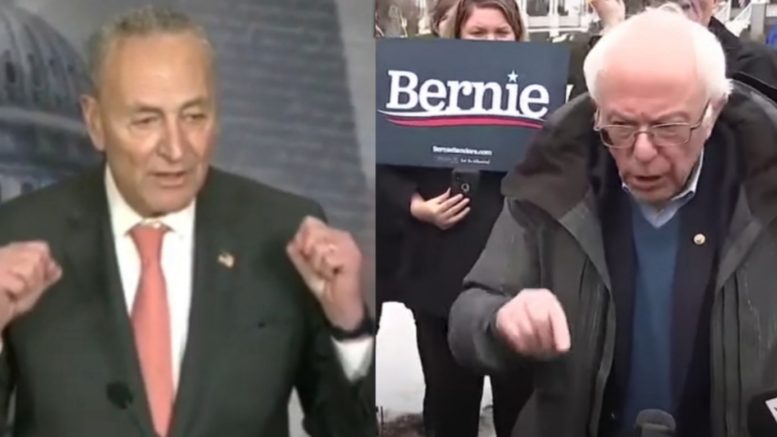 As Bernie Sanders was on his way to decisively winning in the New Hampshire primary on Tuesday, Senate Minority Leader Chuck Schumer indicated that the Democratic Party will be “strongly united” even if the nominee pushes socialist ideologies.

Schumer made the remarks alongside House Speaker Nancy Pelosi at a press conference regarding President Trump’s budget plan.

A reporter asked, “[Are you] comfortable with a so-called Democratic Socialist, as he calls himself, at the top of your ticket?”

He continued, “You will see in a few months, Democrats will be strongly united together. And we will be focused like a laser on beating Donald Trump.”

“The enthusiasm that you last saw in 2008 to elect Barack Obama, you will see among Democrats this summer and fall to get Donald Trump out of office,” Schumer added. Video Below

Related Article: Bernie Sanders Suggests He Should ‘Get The Hell Out Of Politics’ If He ‘Can’t Win An Election’ On His Ideas

Speaker Pelosi then capped off Schumer’s remarks by suggesting the Democratic Party is an “engine” that can be used to help beat President Trump in 2020, and she cited the “net gain” of 40 seats in the House from the 2018 election.

“We set a model for how to win elections by winning in the most gerrymandered, voter supressed political arena you could ever put together net gain of 40 seats,” Pelosi claimed. “So, we think we are an engine that can help us win that election, whoever our nominee is.” Video Below