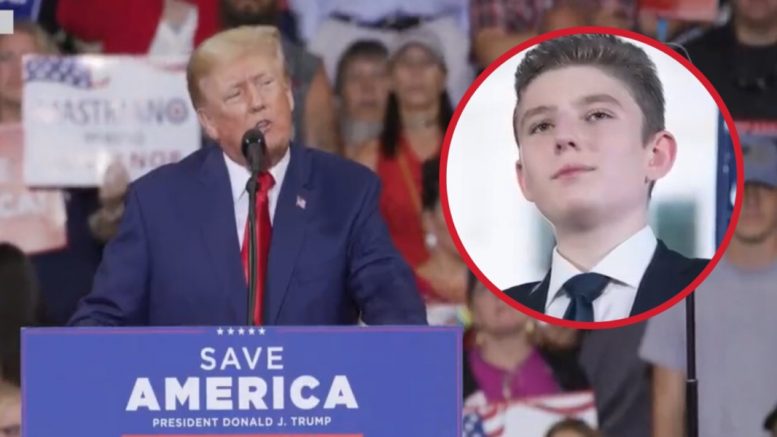 During a “Save America” rally in Wilkes-Barre, Pennsylvania Saturday evening, 45th President Donald Trump revealed that the FBI conducted a “deep and ugly search” of his youngest son Barron Trump’s room during the raid at his Mar-a-Lago home in Palm Beach, Florida last month.

Trump called the FBI raid a “shocking” abuse of power and criticized Democrat career politician Joe Biden’s administration for carrying it out.

“A few weeks ago you saw when we witnessed one of the most shocking abuses of power by any administration in American history,” Trump told crowd at the Pennsylvania crowd rally. “The shameful raid and break-in of my home, Mar-a-Lago, was a travesty of justice that made a mockery of America’s laws, traditions, and principles.”

Trump slams Biden over his politically motivated raid of Mar-a-Lago, likens it to stuff you’d see in a third world nation. pic.twitter.com/WW5v7F57fN

“They rifled through the first lady’s closet drawers and everything else and even did a deep and ugly search of the room of my 16-year-old son, leaving everything they touched in far different condition than it was when they started,” Trump announced.

“Can you believe it? The FBI and the Justice Department have become vicious monsters, controlled by radical left scoundrels, lawyers, and the media who tell them what to do — you people right there — and when to do it,” he added. Video Below

BREAKING: Donald Trump says the FBI did a “deep and ugly search” of 16 year-old Barron’s room during the raid on Mar-a-Lago. pic.twitter.com/qLNgHsxXVy

WATCH: Roger Stone Caught On Camera Grooving To The Beat Outside Of CPAC