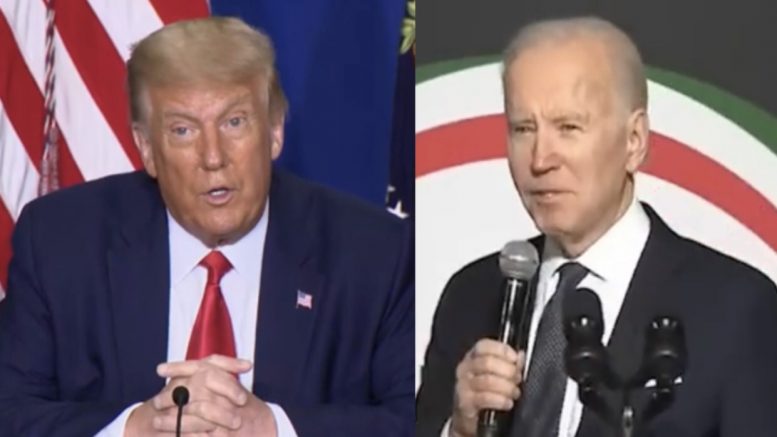 45th President Donald J. Trump called out the “two standards of justice in our country” in a video post on Truth Social, saying 80-year-old Joe Biden is getting the “white glove treatment” with an establishment special counsel after classified documents were found at his Delaware home and at the Penn Biden Center.

In contrast, Trump said his case was being handled by a “Trump hating Special Counsel”, slamming the double standard.

“We have two standards of justice in our Country: One for people like you and me and one for the corrupt political class, of which there are many,” President Trump said in a video on Truth Social.

The 45th President compared the two special counsels, said Joe Biden kept documents on the wet floor of his garage, and noted that the Democrat career politician would not have had the power to declassify files when he was vice president.

“At the very same moment when my ultra secure Mar-a-Lago home was raided by the FBI, Joe Biden was harboring classified documents in his China-funded Penn Center and his unsecured garage — right on the floor, piles of paper. The floor was probably very wet and damp as many garages are,” Trump said.

“Yet while I’m being persecuted by Trump hating Special Counsel — I call them special prosecutors, but this one in particular — is a prosecutor and a Trump-deranged person. They prosecute all sorts of things; he prosecuted war crimes and war criminals,” he explained of special counsel Jack Smith.

“Joe Biden, in the meantime, is being given white glove treatment by a establishment hack who tried to cover up the Russia hoax. He actually tried to cover it up. It’s a travesty,” Trump said, referring to Robert Hur who was appointed last week by Merrick Garland to investigate Biden.

“Biden lied to the American people and weaponized the Justice Department, or as I call it: the injustice department — to go after me for the very crime he actually committed, and he wasn’t president. So he didn’t have the right to declassify as I did,” the 45th President pointed out.

“The boxes hoax should be dropped immediately against President Trump,” he urged, before vowing to “restore equal justice under the law and get back to government that delivers for the American people” — if he wins reelection in 2024.

According to the White House, the first discovery was made on November 2nd at the Penn Biden Center for Global Diplomacy and Engagement in Washington.

Yet Biden and the White House, which had promised to “bring transparency and truth back to the government” only acknowledged the find last week, after CBS News reported details.