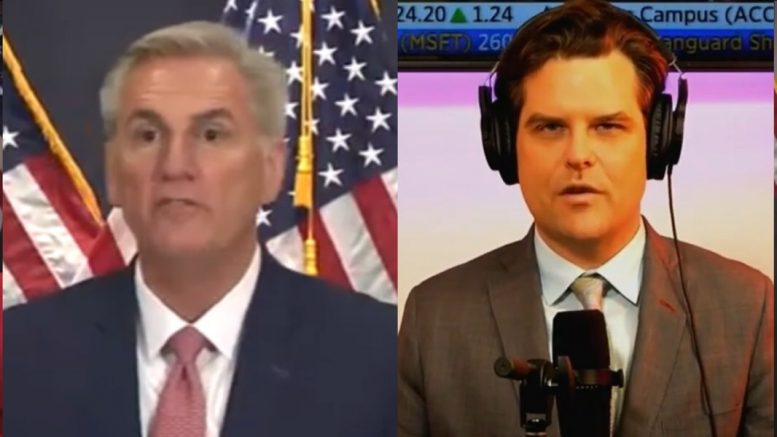 Rep. Matt Gaetz (R-FL) is “not voting” for Kevin McCarthy for Speaker of the House as he believes the California representative is a “shill of the establishment”.

“I think that Kevin McCarthy is little more than a vessel through which lobbyists and special interests operate,” Gatez told the Daily Caller.

“And the reason most of my colleagues are voting for him is they benefit from the redistribution of lobbyist and special interest money, through McCarthy, to their campaign account,” Rep. Gaetz said. “And the bottom line is: that’s not going to work anymore”.

“We need someone like [Ohio Republican representative] Jim Jordan as the Speaker of the House who can cast a vision and who has the trust and confidence of people across the spectrum in the House,” the Florida congressman recommended.

Republicans will soon retake the House of Representatives, and the House is expected to vote on the speakership January 3.

Current Minority Leader Kevin McCarthy is the front-runner to win the post, but he is currently short of the 218 votes he would need to win the post if all members of the House vote on the process. Because of Republicans razor-thin majority, McCarthy can only lose four party votes and win the position.

I'm not voting for Kevin McCarthy for Speaker because he's just a shill of The Establishment.

The reason most of my Republican colleagues are supporting him is because they benefit from the redistribution of lobbyist & special interest money from McCarthy to their campaigns. pic.twitter.com/bdJmjwy6W7

Related: Lou Dobbs Calls McCarthy a ‘RINO’, Says he ‘Could be Excited About Jim Jordan’ as House Speaker

Trump On McConnell’s Criticism Of RNC Censuring Cheney & Kinzinger: “McConnell Does Not Speak For The Republican Party”