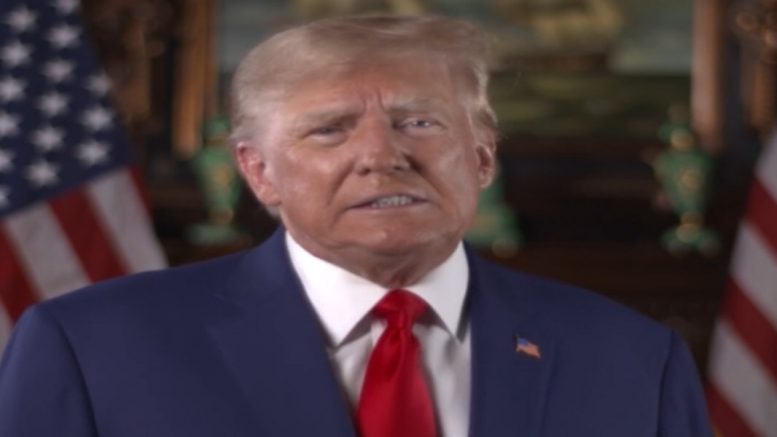 45th President Donald J. Trump announced, in a video message on Truth Social, a plan to “shatter the left-wing censorship regime and to reclaim the right to free speech for all Americans”, by signing an executive order after his “inauguration” in 2025.

“If we don’t have free speech, we don’t have a country. It’s as simple as that. If this most fundamental right is allow to perish, then the rest of our rights and liberties will topple, just like dominions, one by one,” President Trump said Thursday. “They’ll go down.”

“A sinister group of deep-state bureaucrats, Silicon Valley tyrants, left-wing activists, and depraved corporate news media have been conspiring to manipulate and silence the American people. They have collaborated to suppress vital information on everything from elections to public health. The censorship cartel must be dismantled and destroyed, and it must happen immediately,” he recommended.

President Trump vowed: “Within hours of my inauguration, I will sign an executive order banning any federal department or agency from colluding with any organization, business, or person to censor, limit, categorize or impede the lawful speech of American citizens.” [Emphasis added].

He also said he would “ban federal money from being used to label domestic speech as mis or disinformation”, adding that he “will begin the process of identifying and firing every federal bureaucrat who has engaged in domestic censorship, directly or indirectly”.

EXCLUSIVE VIDEO: I have obtained a copy of President Trump unveiling the major planks of his official Free Speech Policy Proposal

This is the first video drop in a series to come from his 2024 presidential campaign pic.twitter.com/PDMUBNmc8W

Related: Trump on ‘Twitter Files’ Release: ‘Do you Throw the Presidential Election Results of 2020 OUT & Declare the RIGHTFUL WINNER or do you have a NEW ELECTION?’