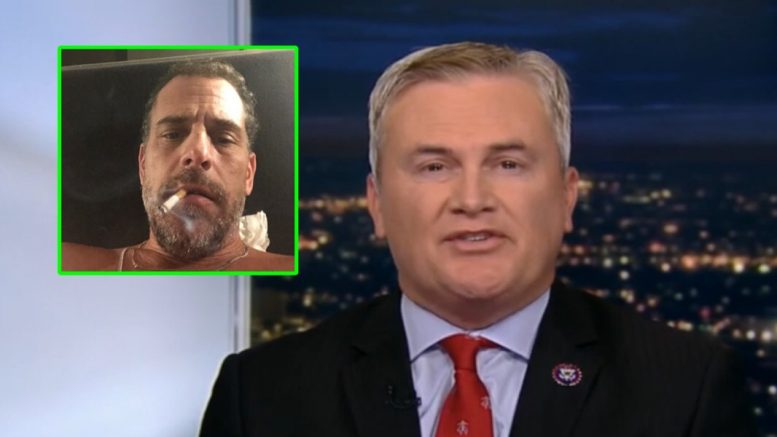 Rep. James Comer (R-KY), who will chair the House Oversight Committee in January, said Friday, during an airing of Fox News’ “Hannity”, that “every employee at Twitter who was involved in suppressing the Hunter Biden laptop story will have an opportunity to come before Congress and explain their actions to the American people”.

His remarks came after Twitter’s CEO Elon Musk shared shocking revelations over what took place at Twitter — behind-the-scenes — in a thread shared on the social media platform by independent journalist Matt Taibbi.

The “Twitter Files,” showed a back-and-forth debate within Twitter about the Hunter Biden laptop story and the thinking behind the ban. Twitter claimed it blocked the Hunter Biden story because of a company policy on hacked materials.

Taibbi tweeted “there’s no evidence – that I’ve seen” that the federal government had a role in suppressing the Hunter Biden laptop story but that “the decision was made at the highest levels of the company, but without the knowledge of CEO Jack Dorsey, with former head of legal, policy and trust Vijaya Gadde playing a key role.”

“‘They just freelanced it,’ is how one former employee characterized the decision. ‘Hacking was the excuse, but within a few hours, pretty much everyone realized that wasn’t going to hold. But no one had the guts to reverse it,’” Taibbi wrote.

Taibbi then shared a screenshot of an exchange between Gadde, Twitter’s former Trust and Safety chief Yoel Roth and Twitter spokesman Trenton Kennedy, who wrote, “I’m struggling to understand the policy basis for marking this as unsafe.”

Rep. James Comer said of Hunter Biden’s laptop: “Many in the mainstream media said this was just a conspiracy theory”, adding, “The mainstream media is still trying to use the old talking points that the laptop is somehow Russian disinformation.”

“We know from CBS’ forensic audit, the laptop is legitimate,” he said, after the news source verified the laptop two years later. “And now we know from Elon Musk that there was correspondents between the Biden campaign and the Democrat National Committee to suppress this story”.

Comer believes the Hunter Biden laptop story “would have had a huge impact on the presidential election”, and noted, “There was no evidence at any time the laptop story wasn’t legitimate”.

“This story is just beginning, because we are gonna have every single person at Twitter who was involved in this in front of the House Oversight Committee as soon as possible,” Rep. Comer said.

Regarding the so-called “hack materials” policy Twitter kept citing at the time, Taibbi cited “several sources” who say that policy normally required an official/law enforcement finding of a hack. But such a finding never appears throughout what one executive describes as a ‘whirlwind’ 24-hour, company-wide mess.”

Taibbi concluded the thread, calling it a “whirlwind 96 hours for me” but teased that “There is much more to come, including answers to questions about issues like shadow-banning, boosting, follower counts, the fate of various individual accounts, and more.”

Elon Musk said “Episode 2 of The Twitter Files” will take place on Saturday as well as a “live Q&A.”

Tune in for Episode 2 of The Twitter Files tomorrow!

Related: James Woods: ‘I Will be Getting a Lawyer’ & ‘Suing the Democratic National Committee no Matter What’