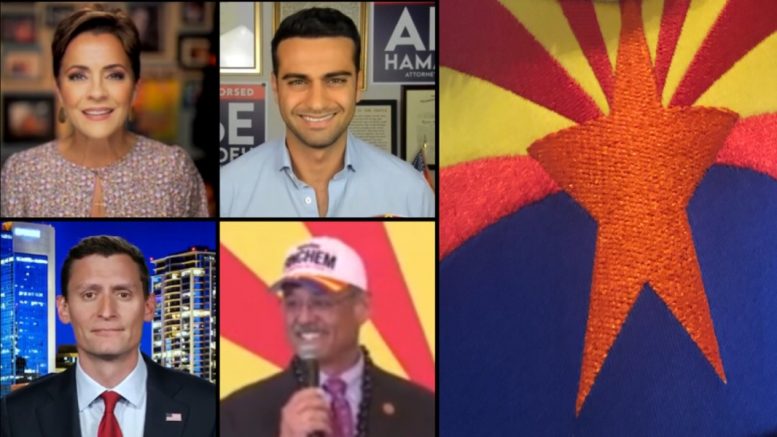 This article was originally published November 15, 2022 and updated on November 16, 2022 to provide additional information.

Four Arizona candidates are refusing to concede in midterm elections — which were called by legacy media outlets — ahead of remaining ballots still being counted and cured in the Grand Canyon State.

“Arizonans know BS when they see it,” Kari Lake wrote on Twitter Monday, appearing to dismiss legacy media projections as Katie Hobbs, who oversees elections in the state, claimed victory. Per Arizona law, the race may go to a recount.

Arizonans know BS when they see it.

The Lake Campaign encouraged voters on Tuesday to make sure their ballot is counted:

Our office is full right now full of grassroots Patriots who haven't given up the fight.

We will continue to collect stories and cure ballots until everyone's voice is heard and their vote is counted.

We encourage everyone to do the same.

Mark Finchem said on Monday, “We are not conceding and are fighting”.

We are not conceding and are fighting https://t.co/x3HjteWLxh

The media does not decide elections, the voters do.

Abe Hamadeh tweeted on Sunday, “FIGHT LIKE HELL”, adding on Tuesday, “Feeling blessed that all my supporters are working overtime to cure ballots and ensuring every vote is counted. Thank you.”

Feeling blessed that all my supporters are working overtime to cure ballots and ensuring every vote is counted. Thank you.

Meanwhile, the Lake Campaign wondered “what incentive did Katie Hobbs have to run this election properly” in Arizona?

What incentive did @katiehobbs have to run this election properly?

And in the days following her election day disaster, what incentive did she have to help clean up her own mess? https://t.co/jikCpU425V

Ben Bergquam shared a video after following a Penske truck in Maricopa County over the weekend. Mark Finchem asked, “Where are the observers? Chain of custody broken.”

Ben Bergquam was outside the Maricopa County election center and followed a Penske truck leave the center and return to Runbeck. Once at Runbeck, the gate is closed. No observers allowed! pic.twitter.com/OdNP9VyoGv

Additionally, some voters in Arizona told their stories of election irregularities they encountered:

Poll watcher said a county technician showed up and that is when it all went downhill. pic.twitter.com/ewsUy9HKzY

This is Kelly, whose ballot was rejected after numerous times it was put in the tabulator. She lives in North Phoenix, one of the heaviest GOP parts in the city and Maricopa County.

Keep spreading the word about #AZVoterSupression and share your stories! pic.twitter.com/VSovo1STim

This is Dan who shares that there was a tabulator at the Desert Hills polling location that had been BROKEN FOR 7 HOURS.

The other tabulator rejected his ballot 13 TIMES before he left to go to another polling location over 25 minutes away. #AZVoterSuppression pic.twitter.com/SpO3MfcQ1M

This poll observer for the Anthem, AZ polling location in one of the reddest parts of Maricopa County shares that 3 out of 5 ballots were not being scanned on Election Day.

Tabulators and printers continued to have issues even AFTER being replaced. #AZVoterSupression pic.twitter.com/Ajn0RzIzCE

After having his ballot rejected numerous times, “he looked at the line, shook his head and then left.”

How many times did this happen in Arizona on Election Day?