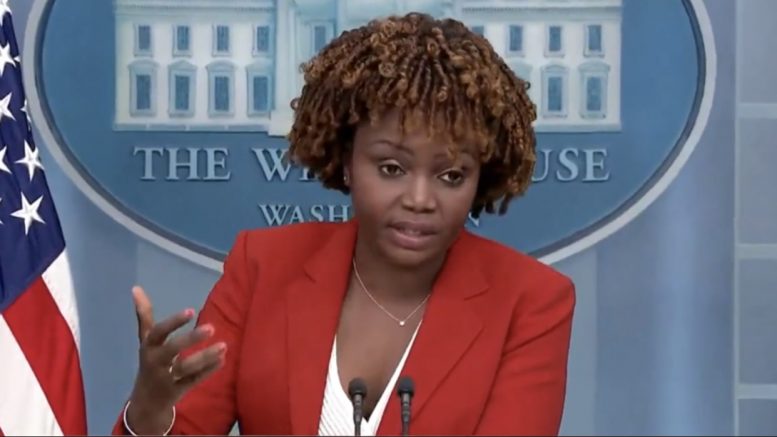 On Monday, The Intercept released leaked documents detailing how the government, including the Biden administration, has colluded with Big Tech to censor various topics of information.

White House press secretary Karine Jean-Pierre was asked on Wednesday about the Biden administration colluding with social media companies to censor and flag information they deem as “disinformation” or against their narrative.

Jean-Pierre did not deny if the White House is engaged with Big Tech to flag posts, telling reporters from prepared remarks in her binder, “The Biden administration remains fully committed to our mission to protect the security and resilience of our, you know, elections and safe guard election infrastructure”.

“That includes combatting disinformation. That is something that we are committed to. You know, we work to protect that — protect Americans from disinformation that threatens the home land, including malicious efforts spread by foreign adversaries. … Cross agency work continues to this day,” she admitted.

When asked directly if the White House is still engaged with Big Tech to flag “misinformation”, Jean Pierre said, “I don’t have anything more to add. This is a Department of Homeland Security that I would refer you to”.

Karine Jean-Pierre has no clue what to say when asked about the Biden administration's work with social media companies to censor information they don't like as "misinformation." pic.twitter.com/CI2mYA6ckZ

Well, Big Tech platforms just got CAUGHT colluding with the Biden Regime through special portals to take down “wrong” content

'Platforms have to get comfortable with government' pic.twitter.com/MmCmhLW6Cz

Related: Trump On Big Tech Censoring Him: “They Will Be Stopped Eventually…There’s Gonna Be A Lot Of Litigation Very Soon”