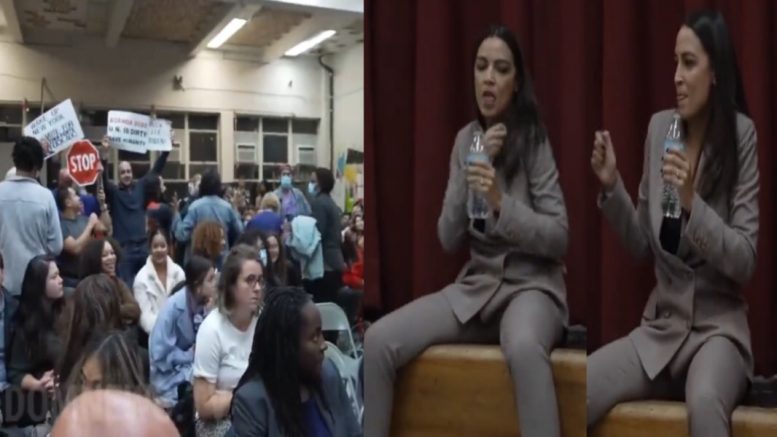 Protestors confronted and disrupted Rep. Alexandria Ocasio-Cortez at a town hall in Astoria Queens on Wednesday night, chanting “AOC has got to go” — in sync with a drum beat — echoing across the room.

The Democrat congresswoman was filmed moving her shoulders in beat and dancing to the protesters chants, appearing to shrug of their criticism of the far-left squad member.

Grab some popcorn & add extra butter. AOC was just humiliated at her own town hall meeting. It didn’t go her away and this is how she responded . pic.twitter.com/AZUF7lonxB

This is the second town hall event recently in which the progressive politician has faced heckling for her actions in DC. Last week, she was booed at a town hall in the Bronx. Her former supporters challenged her decision to continue sending military aid to Ukraine.

“You voted to mobilize and send money to Ukrainian Nazis,” a protester shouted at her.

“You have done nothing. Tulsi Gabbard has shown guts, where you’ve shown cowardice,” he said, referencing the former Hawaii Democratic congresswoman’s public decision to leave the Democratic Party last week.

The sophomore congresswoman is running for reelection against Republican Tina Forte.

My team visited @AOC’s office and found a special guest waiting for her outside! #CluckAOC pic.twitter.com/IQa8h2hzYh

Meanwhile, some users on Twitter mocked the New York congresswoman for her response at the event.

Rep. Lauren Boebert (R-CO) posted a video of AOC at the town hall, writing, “AOC’s tantrums always reminded me of someone. Finally put my finger on it”.

.@AOC’s tantrums always reminded me of someone.

Finally put my finger on it. pic.twitter.com/vXMdW8AqAA

Another one who shouldn’t be roaming the landscape without her handlers… pic.twitter.com/NM0DHwkgVe

Comedian Alex Stein posted a video of AOC commanding the crowd to “listen!”, jokingly adding, “I can’t tell you in words how much it turns me on when AOC talks like this!”

I can’t tell you in words how much it turns me on when AOC talks like this!

Monica Crowley wrote, “her own constituents keep putting her on blast”.

. @AOC wrecked again – her own constituents keep putting her on blast

New York City is a shithole and when AOC's constituents complain to her about it at a townhall, she dances like a slow child instead of addressing their concerns. 🤡