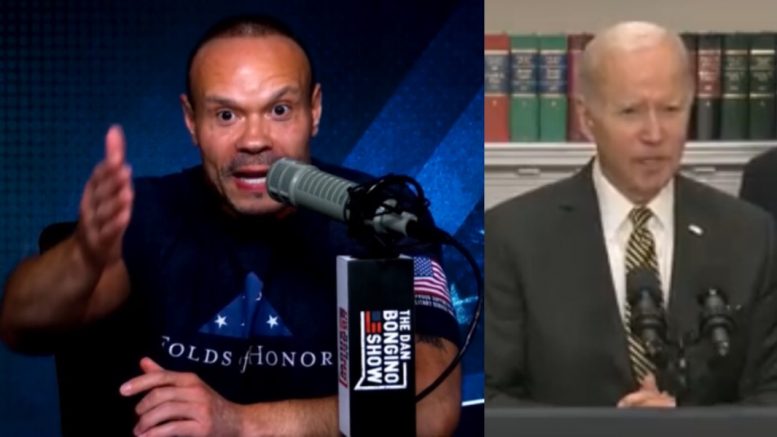 Former secret service agent Dan Bongino called out 79-year-old Joe Biden and his press secretary Karine Jean-Pierre for not being honest to the American people about what his administration is doing to the fossil fuel industry.

“Nothing Biden is telling you is true,” he said during “The Dan Bongino Show” on Thursday. “Nothing. The guy is an unrepented liar. He has lied his entire life about everything. He is a failed human being. A failed father, a failed man, a failed political leader. … [He’s] an idiot.”

Bongino’s criticism at Biden and his press secretary come a day after the career politician claimed his “administration has not stopped or slowed down U.S. oil production”.

Biden: "Let's debunk some myths: My administration has not stopped or slowed U.S. oil production." pic.twitter.com/jSMdBi64Gl

Biden’s spokeswoman: “How is the administration trying to put [oil companies] out of business?”

Biden himself: I WILL END FOSSIL FUELS. pic.twitter.com/kq07X46dJf

“It has not been pretty if you want to develop domestic supply.” pic.twitter.com/Y16mkezdSh

Biden just now: "We have not stopped or slowed oil production”

Look at what Biden has done to our Strategic Petroleum Reserve … and gas prices are still close to a $1.50 more per gallon than when he took office. pic.twitter.com/rx6XPK0rPy

Gen. Flynn Releases a Statement on the Unfolding Situation in Ukraine: “This ‘Invasion’ was Totally Avoidable”