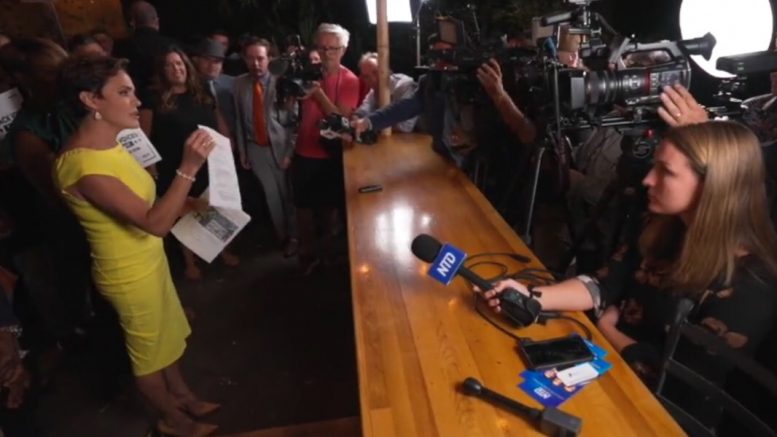 Arizona gubernatorial Republican candidate Kari Lake schooled reporters when she “brought receipts” after being asked by a reporter — at a “Black Voices for Kari” campaign event — if she could comment to criticism of being labeled an “election denier”, following a Sunday interview with CNN.

Lake, at the event, was handed a stack of printed papers with quotes of prominent Democrats denying previous election results. She read off some of their statements to reporters, which included Joe Biden’s White House press secretary and twice failed Democrat presidential candidate Hillary Clinton.

“Oh wow! Look at this. This is from Joe Biden’s press secretary; ‘Reminder: Brian Kemp stole the gubernatorial election from Georgia and Stacy Abrams’. Democrats saying that. Is that an election denier?” Kari Lake asked reporters, referring to previous election claims Karine Jean-Pierre made about Gov. Kemp and 45th President Donald Trump.

“Hillary Clinton [said], ‘Trump is an illegitimate president'”, the Arizona gubernatorial candidate continued, while holding up the “receipts” in front of reporters. “Is she an election denier?”

“So it’s okay for Democrats to question elections, but it’s not not okay for Republicans? It’s a crock of BS. Everyone of you knows it. We have freedom of speech, and we’re not gonna relinquish it to a bunch of fake news propagandists,” she said, before telling reporters they too can have a copy of the papers with Democrats denying elections.

“If you want a copy of these … I’m sure [we] can help you get a copy and help you be journalists. Look it up. It’s been happening for a long time. Since 2000, people have questioned the legitimacy of our elections. And all we’re asking is that in the future, we don’t have that happen anymore,” Lake said.

“If you’re gonna start throwing around the term ‘election denier’, let’s remember who the other election deniers were: Hillary Clinton and all the Democrats,” Lake told reporters.

We leave you with a video compilation of Democrats denying election results:

Here’s something Joe Biden DOES NOT want you to see.

Related: Doocy Confronts Jean-Pierre Over her ‘Stolen Election’ Tweets: ‘If Denying Election Results is Extreme Now, Why Wasn’t it Then?’