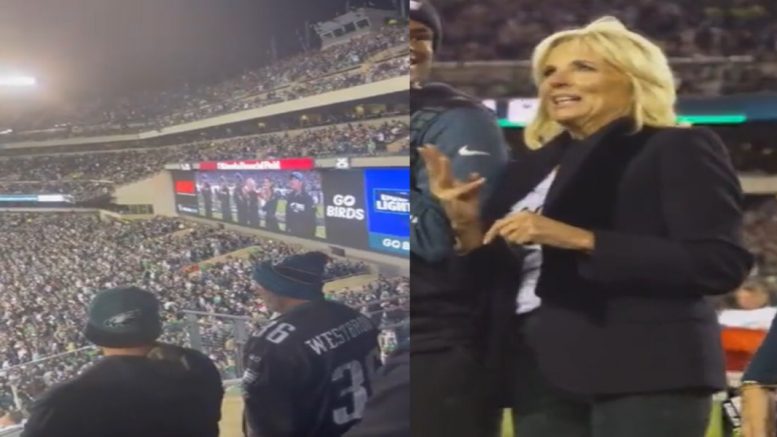 Fans in attendance at the stadium, during the Philadelphia Eagles vs Dallas Cowboys week 6 game, appeared to loudly boo First Lady Jill Biden when she stepped onto the the Lincoln Financial Field Sunday evening.

According to the Philadelphia Inquirer, Biden was at the event to promote the White House’s Cancer Moonshot initiative. She was joined on the field by cancer patients and survivors as well as their families

A viral video on social media appears to show the crowd chanting “F**k Joe Biden”. (**The Freedom Times cannot confirm if the following video below is real or altered).

Biden was an honorary captain for the Eagles and led fans in a rendition of “Fly Eagles Fly” fight song.

The fans at the Eagles game booed Jill Biden when they put her on the Jumbotron tonight 😂 pic.twitter.com/MUZHmBV34i

It’s a special night for this Philly girl — I get to cheer on my @Eagles alongside these brave cancer survivors and their families.

Thank you @NFL for raising awareness through Crucial Catch. We all have a role to play in ending cancer as we know it. #CancerMoonshot pic.twitter.com/VfCdbrl2ce