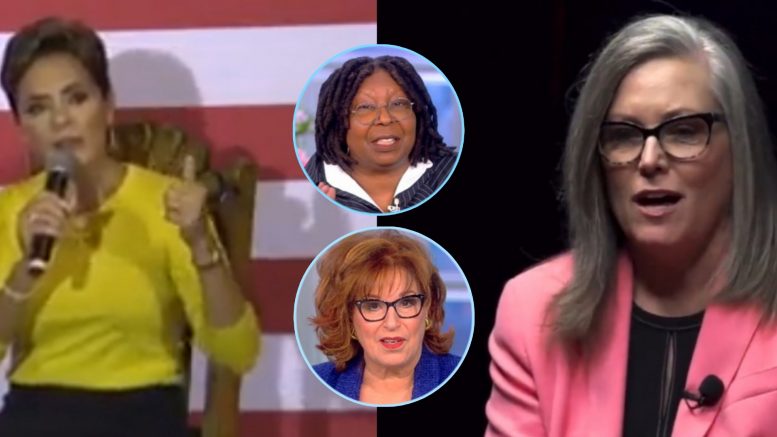 Arizona gubernatorial candidate Kari Lake is urging her Democrat opponent Katie Hobbs to a debate her, even if it means doing it on “The View” with liberal hosts Joy Behar and Whoopi Goldberg as moderators.

Lake made the suggestion as Hobbs appears to be refusing to debate her Republican counterpart just weeks before Arizona’s midterms.

Related Article: WATCH: Kari Lake Torches CNN Correspondent Outside of Event: ‘The People Don’t Like What you Guys are Peddling, Which is Propaganda’

Speaking in front of a crowd at a campaign event, Lake stated as follows:

“I’ll even debate you on ‘The View’ and let Joy Behar and Whoopi ask the questions, but show some courage.”

🚨 DEBATE CHALLENGE 🚨 @KariLake asks @KatieHobbs to join her on @TheView with @JoyVBehar & @WhoopiGoldberg as moderators pic.twitter.com/ONWioF7uS5

The latest challenge made by Lake comes days after a video went viral of Hobbs struggling to answer a question about what specific lesson she has learned from the Latino community, as seen here:

Want to know why Katie Hobbs refuses to debate? Watch this: pic.twitter.com/rF5BNffX29

Senate Dem Candidate Fetterman: ‘Pennsylvanians’ on the ‘Poorer Side’ & ‘People of Color’ are ‘Less Likely to Have Their ID at any one Given Time’