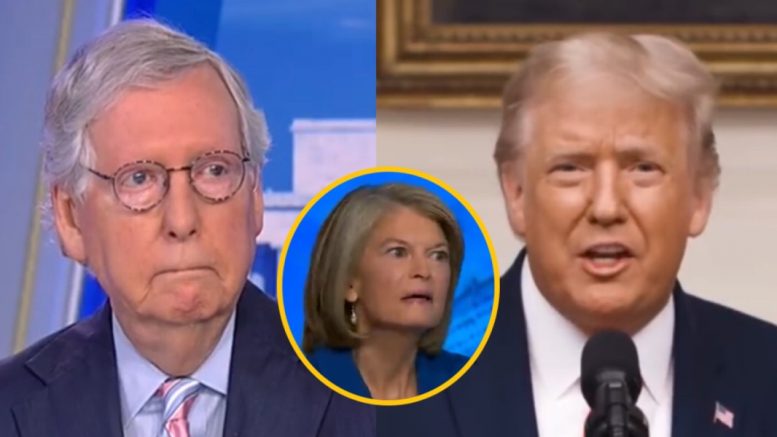 Instead of directing the funding to other Republican candidates in need, ahead of next month’s midterm election, Trump said McConnell authorized $9 million to spent in order to “beat” Kelly Tshibaka, who is leading Murkowski in polls.

“The Democrat has no chance, and yet the Old Broken Crow, Mitchell McConnell, is authorizing $9 Million Dollars to be spent in order to beat a great Republican, Kelly, instead of $9 Million Dollars that could be used for Blake Masters, and other Republicans, that with this money would beat their Democrat opponent. Isn’t it ironic?” he asked.

A report by the Anchorage Daily News found that the Senate Leadership Fund, a Republican PAC with ties to McConnell, funded television, radio and internet ads in Alaska, attacking Tshibaka in support of Murkowski.

Trump has endorsed both Masters and Tshibaka.

During an interview on the “Clay Travis and Buck Sexton show” Monday, Kelly Tshibaka said, “Alaskans get to decide this year whether they want to have a senator who stands with Alaska, who’s going to fight for our Alaskan families and the workers who are being crushed by inflation and our economy that’s been just absolutely devastated by Biden’s policies?

“Or are we going to vote for the senator has been standing with Joe Biden and his radical environmentalists that she’s confirmed sometimes by tiebreaking votes, and the dark money special interests funding her campaign?” she asked.

“When you put together the millions and millions and millions of dollars in her campaign and her PAC — that’s, quote, “Alaskans for Lisa,” none of whom are Alaskan — and the Senate leadership funds, you know, the D.C. insiders in the swamp coming in here flooding our state with money. Less than 1 million of it is actually from Alaska. And I think if you add that all up together, it’s like close to $20 million,” Tshibaka said.

In the 2020 General Election, voters approved an initiative to establish a Nonpartisan Pick One Primary Election system and a Ranked Choice Voting General Election system. Ranked Choice Voting allows voters to rank candidates in order of preference. In each race, voters will rank their choices in order of preference. Votes are counted in rounds, according to Alaska Division of Elections.

Related: Trump Calls for Sen. McConnell to be Replaced as GOP Leader ‘Immediately’: ‘Pawn for the Democrats’