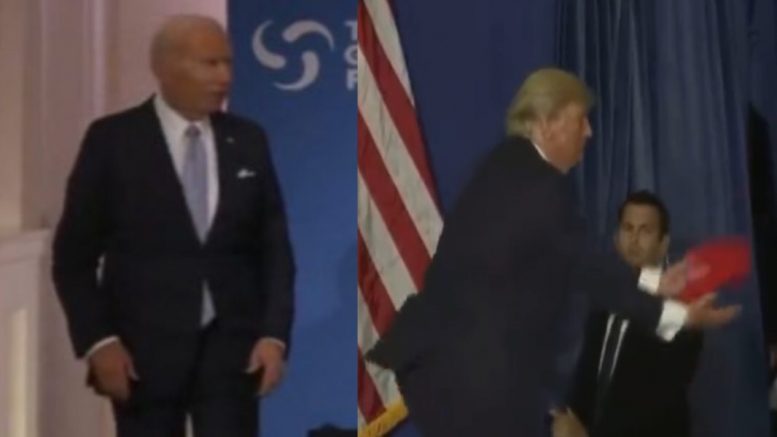 45th President Donald Trump showed off a bit of his talent at a rally in Michigan Saturday evening when he caught a sharpie and a MAGA hat on the fly, offering an autograph to one of his many fans in the audience.

Trump’s skill caught on camera was in contrast to Joe Biden, who appeared to be lost and confused while walking off stage, following his remarks at the Global Fund Conference in a week filled with gaffes — including searching in the crowd and calling out for Republican Congresswoman Jackie Walorski, during an event at the White House, who had died a month earlier.

Joe Biden appeared to be lost and confused on stage following remarks he delivered at the Global Fund’s Seventh Replenishment Conference on September 21.

Where ya going, Big Guy? pic.twitter.com/hvMjZlprWb

Donald Trump Jr. reacted to his father’s brilliance of catching the hat and sharpie, then pointed out that Joe Biden can’t “bring a fricken bicycle to a stop”.

Biden cant bring a fricken bicycle to a stop and Trump is out there catching sharpies out of mid air. https://t.co/BYeyLccoGy

Don Jr. was referencing when Biden was caught on camera falling off his bike in front of a group of his supporters and the media in June.

Elon Musk Mocks Joe Biden: ‘The Real President is Whoever Controls the Teleprompter’