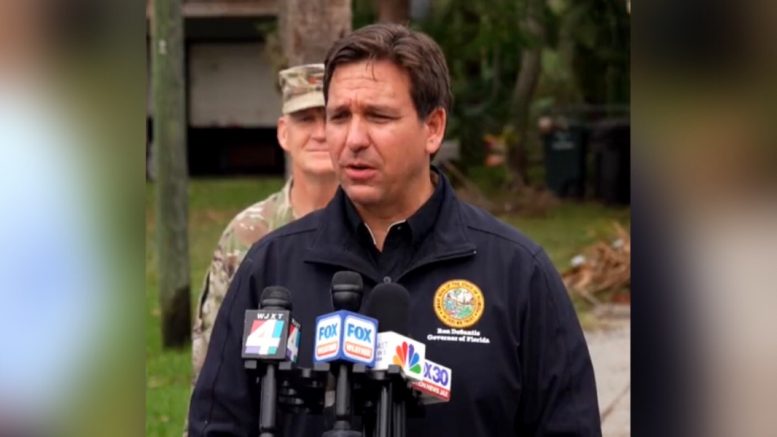 Florida Republican Governor Ron DeSantis issued a stern warning to those who may try to take advantage of the victims of Hurricane Ian.

DeSantis made the comments Friday during a news conference, reminding potential looters that the Sunshine State is a Second Amendment state.

“The other thing we’re concerned about particularly in those areas that were really hard hit, is you know, we want to make sure we’re maintaining law and order,” Governor DeSantis said.

The Florida governor said that people could “bring boats into some of these islands” to “ransack people’s homes” and strongly advised against doing it.

“I can tell you, in the state of Florida, you never know what may be lurking behind somebody’s home, and I would not want to chance that if I were you, given we are a Second Amendment state,” Governor DeSantis informed potential looters.

Florida is a law and order state.

Looting and lawlessness will not be tolerated. pic.twitter.com/8Ma9RuSlPq

DeSantis’ former press secretary, now the governor’s rapid response director, Christina Pushaw, posted a picture of a Florida resident in Lee County who posted signs by their front door that reads: “TRY TO LOOT. I WILL EAT YOUR FACE”.

Looting was a major problem in New Orleans after Katrina. Hundreds of first responders actually had to leave the devastated city because it was so chaotic & dangerously out of control, overrun by crime in the days after the storm. That won’t be the case in Florida. Fair warning. pic.twitter.com/HASvhrt2rX

Warning to anyone who thinks they can loot Floridians’ homes pic.twitter.com/DM8mjUgaEt