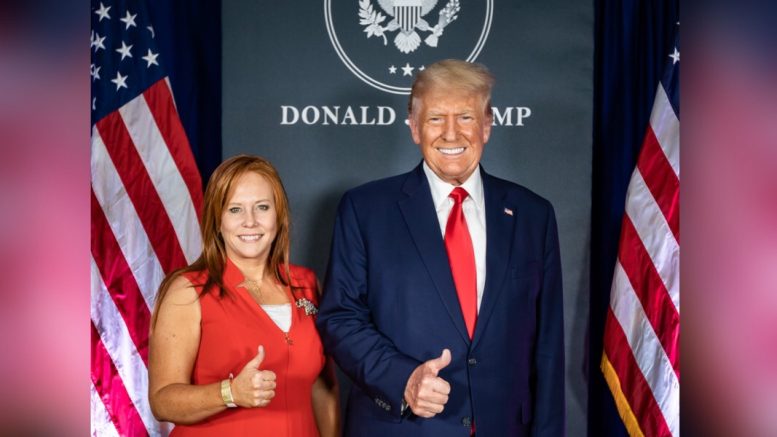 45th President Donald J. Trump formally announced his “Complete and Total Endorsement” for Sandy Smith in an email statement on Tuesday, saying that she “will be a tremendous and proud Representative” for North Carolina’s 1st Congressional District.

Smith advanced from the Republican primary on May 17 and is running against Democratic congressional nominee Donald Davis in the general election on November 8.

“Sandy Smith will be a fantastic Representative from the Great State of North Carolina’s 1st Congressional District. I love North Carolina!” President Donald Trump expressed in statement from his “Save America” PAC.

The 45th President continued: “A successful business owner and proud military mother, Sandy will Strengthen our Military, Fight for our Vets, Promote School Choice, Defend our under siege Second Amendment, and Support our Country’s Great Farmers and Manufacturers. Importantly, she knows what to do against ever-spiraling Inflation—and she will do it.”

Trump slammed Smith’s Democratic opponent, Davis, calling him a “Radical Left puppet of Joe Biden and Nancy Pelosi”, adding, that he “believes in Open and Unchecked Borders and doesn’t mind the fact that other Countries are dumping their prisoners into the United States of America.”

“Davis refuses to fight the Out-of-Control Crime in our Cities, and strongly believes in Defunding our Police. He voted against the Parents’ Bill of Rights Act and is against, believe it or not, Voter ID,” Trump pointed out. “Don Davis is a disaster for North Carolina and all that its Great People stand for!”

“Sandy Smith, on the other hand, will be a tremendous and proud Representative of the 1st Congressional District. She will never let you down and, for that reason, Sandy Smith has my Complete and Total Endorsement!” the 45th Commander in Chief announced.

Sandy Smith expressed her gratitude upon receiving President Trump’s formal endorsement, saying that she is “honored”.

“I am honored to have the endorsement from President Trump! Under his leadership the economy was much better, inflation was under control, our border was secure and we took care of our veterans and military! Thank you President Trump! Let’s win! #NC01” Smith wrote on Twitter.

I am honored to have the endorsement from President Trump! Under his leadership the economy was much better, inflation was under control, our border was secure and we took care of our veterans and military! Thank you President Trump! Let's win! #NC01 pic.twitter.com/L7MqaCdCGa

Sandy Smith also shared a picture of herself, giving a thumbs up alongside President Trump.

“Enjoyed seeing President Trump again! We had a nice talk about getting our country back on the right track!” she wrote.

Enjoyed seeing President Trump again! We had a nice talk about getting our country back on the right track! #NC01 pic.twitter.com/KoFt9cPm3o

“I’m a fighter who’s not afraid to stand up for what is right and we need to do everything we can to drain the swamp. I made history by swinging my district 25 points towards the Republicans and now it’s time we finish the job we started and take back our country in 2022,” Smith says on her site.

Sen. Paul Rips Cheney for her Role on the Jan. 6 Cmte: ‘I Think it’s Time we Send Liz Cheney Back to her Home in Virginia’