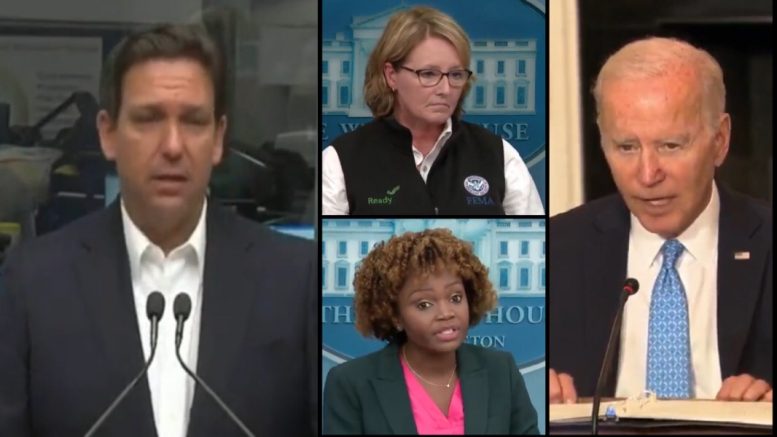 Joe Biden has not reached out to Florida Republican Governor Ron DeSantis ahead of Floridians bracing for Hurricane Ian’s landfall, which is expected to hit the Gulf coast of the Sunshine State in a matter of hours.

Ian, currently a Category 3 hurricane, is projected to swing eastward through the Gulf of Mexico over Wednesday, with most projections placing it on the path of a near-direct hit on the city of Tampa, Fla., bringing with it potentially catastrophic rain amounts and storm surges, Just the News reports.

Karine Jean-Pierre confirms that Biden did not call Gov. Ron DeSantis as Hurricane Ian is approaching.

Federal Emergency Management Agency (FEMA) Administrator Deanne Criswell told reporters during the briefing, “The president is very focused on making sure the federal family has the right resources to support this.”

“That is why I contacted the governor right away, and we have a team of my senior leadership embedded with the governor to make sure that we’re supporting that,” she said.

Asked why Biden had talked with the mayors of the three Florida cities but not DeSantis, Criswell replied: “Again, we have a strong team that’s in place supporting the governor right now.”

Reporter to FEMA Administrator: “But [Biden] made conversations with the mayors, so is there any reason why not governor [DeSantis]?”

Criswell also said communication between the president and the governor has “zero” impact on planning stages.

Q: "The communication between the president and the governor has no impact on how y'all operate?"

Press Sec. Psaki On Biden Appearing Maskless After Signing Mask Mandate: “We Have Bigger Issues To Worry About”