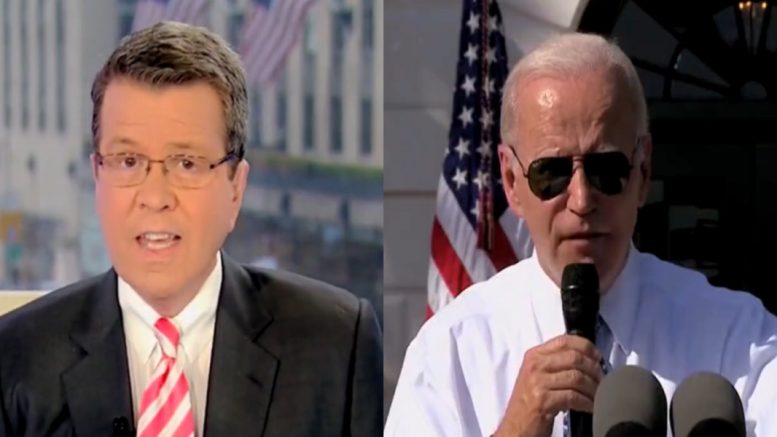 Fox News anchor Neil Cavuto, on Tuesday, broke away on air in the middle of celebratory remarks being made from 79-year-old Joe Biden over the Inflation Reduction Act, amid stocks falling sharply and August’s inflation rising to 8.3% from last year.

“Alright, I do not want to be a party-crasher, but we interrupt this celebration for a hard, cold dose of reality,” Cavuto announced on live TV.

“Stocks [are] tanking because of inflation accelerating — the very inflation that the president says ‘he’s made great progress addressing’, heralding his Inflation Reduction Act as the boom for the economy that we didn’t see in a key number out earlier today,” Neil Cavuto said.

“In percentage terms, roughly 4% hitting the Dow, is the worst we’ve seen in two years, ditto the S&P 500, and again, the NASDAQ. All hit and hit hard, because inflation remains stuck and no one can get it under control. An 8.3% annualized inflation rate in the latest month — the core rate, that is without food and energy also soaring more than 6.3%. This is the 4th 1000th point selloff with the DOW, just this year,” he reported.

Cavuto said Joe Biden is “heralding” the Inflation Reduction Act “as some people say this is actually making this situation worse, because across the board prices are going up.”

The Fox News anchor explained that Biden is “touting the prospect of eventually drug prices going down, but even if he gets that …  it would be but a fraction of the overall costs that continue to soar”, adding, “Keep this in mind, with inflation running 8%, most food and related items are running at about double, sometimes triple that. Whatever progress we’ve seen on gasoline prices has done little to affect prices most everywhere else”.

"We interrupt this celebration for a hard, cold dose of reality." pic.twitter.com/e8iNTMYuBz

Fox News, however, wasn’t the only cable network on Tuesday to point out the stock market diving on Tuesday during Biden’s remarks. RNC Research tweeted how CNN and MSNBC highlighted the market.

CNN: "There is this unfortunate split screen right now with the Dow taking a total beating…it feels like it's hard to be celebratory for some people." pic.twitter.com/KOGbacKFhT

Joe Biden is taking a victory lap on inflation while the stock market tanks…because of inflation. pic.twitter.com/pmTCZlse6d

Related: Trump on Inflation Suring to 9.1% Under Biden Admin: ‘How can People Survive This?…America will not Allow This to go on for Much Longer’

‘I Volunteer To Serve As The Referee’: Terrell Offers After Geraldo Calls Bongino A ‘Son Of A B**ch’ On-Air