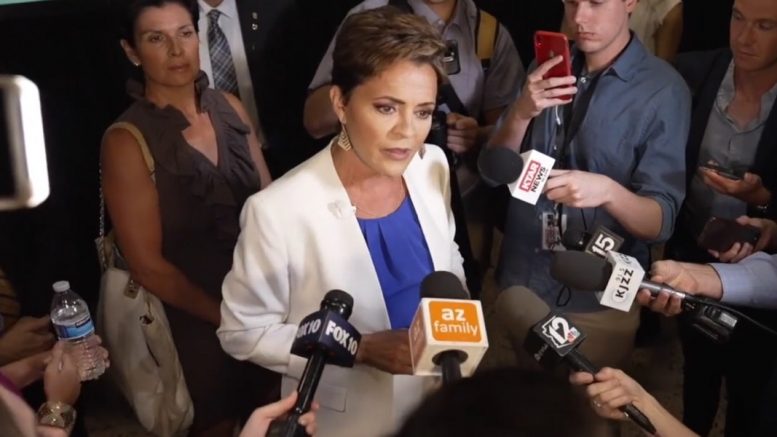 While taking questions from reporters this week at the Arizona Chamber of Commerce and Industry gubernatorial forum, Kari Lake, Republican candidate for Arizona governor, was asked whether she would “consider” being Donald Trump’s vice president, should he run in 2024.

Lake responded, telling the reporter she does not like Washington D.C. and she is “applying for the job of Arizona Governor.”

“No. First of all, I don’t like Washington D.C., especially don’t like it now. It’s funny though that question is asked, because for so long many of you in the media have been trying to act like I don’t have the skill to run for governor. Now, apparently, I’m so skilled that you think I should be VP. So, I take it as a compliment. Thank you for asking” Kari Lake told the reporter.

Asked if she has “talked to Trump about it”, the Arizona gubernatorial candidate replied, “I talk to President Trump all the time, and I have not talked to him about that, no.”

“I am applying for the job of Arizona Governor, and I’m reaching out to the people every single day. Where is Katie Hobbs right now? She should be standing right here, right here answering your questions,” Lake suggested.

“How often does she talk to you?” Lake asked the reporters after Hobbs left the forum. “If you’re MSNBC, maybe all the time. But if you want to ask her a pressing question, she cowers and she’s a coward. I’m applying for a job, and the people of Arizona are the hiring manager and they are my boss. … I’m gonna be here eight years as your governor. … We are going places and going to have the greatest state in the country.” Video Below

BREAKING: Reporter asks @KariLake if she will be Trump’s VP, gets absolutely BLOWN ABACK by her answer pic.twitter.com/veNAE7N4q9