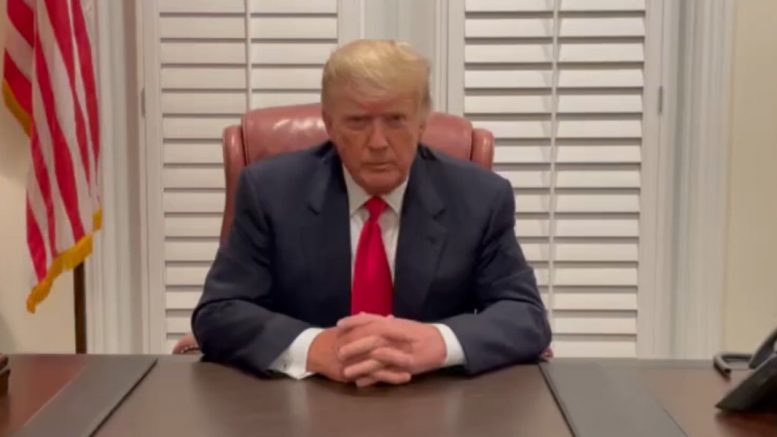 45th President Donald J. Trump issued a statement on Truth Social Tuesday morning doubling down on calls for a new election after it was revealed that the FBI reportedly colluded with Big Tech to suppress the Hunter Biden laptop story during the 2020 presidential election.

His request follows Mark Zuckerberg’s admission last week on “The Joe Rogan Experience” where the Meta CEO revealed that the FBI approached Facebook to warn about a “dump” of “Russian propaganda” going into the election.

“The Presidential Election was BADLY & IRREPARABLY TAINTED by the FBI’s FAKE description of the ‘Laptop from Hell’ to Facebook & the LameStream Media – & for MANY other reasons as well. Declare the rightful winner, or hold a new Election, NOW! Our Country, which is failing badly, knows the ‘score,’ and will never accept Criminal Election Interference,” Trump wrote.

“The FBI just fired its Special Agent In Charge of this outrageous & very illegal assault on the Constitution of the United States of America!” he added.

“The fired agent was in charge of the Mar-a-Lago Raid, and the Election investigation. How’s he doing? Trump also wondered.

On Monday, the 45th commander-in-chief had written: “So now it comes out, conclusively, that the FBI BURIED THE HUNTER BIDEN LAPTOP STORY BEFORE THE ELECTION knowing that, if they didn’t, ‘Trump would have easily won the 2020 Presidential Election.’ This is massive FRAUD & ELECTION INTERFERENCE at a level never seen before in our Country. REMEDY: Declare the rightful winner or, and this would be the minimal solution, declare the 2020 Election irreparably compromised and have a new Election, immediately!”

The Freedom Times reported Monday that FBI Assistant Special Agent in Charge Timothy Thibault is no longer with the bureau and was escorted out of the bureau on Friday amid whistleblower allegations that he showed political bias in his handling of politically sensitive investigations.

Thibault reportedly tried to run interference in the Hunter Biden investigation. According to Senator Grassley (R-IA), Whistleblowers said that DOJ and FBI employees must follow strict substantial factual predication guidelines to open an investigation and that Thibault did not follow these guidelines.

Sens. Chuck Grassley and Ron Johnson (R-WI) are calling on Facebook CEO Mark Zuckerberg to turn over communications between government agencies and Facebook employees regarding Hunter Biden after Zuckerberg admitted that his company censored news articles about the president’s son after the FBI reached out.