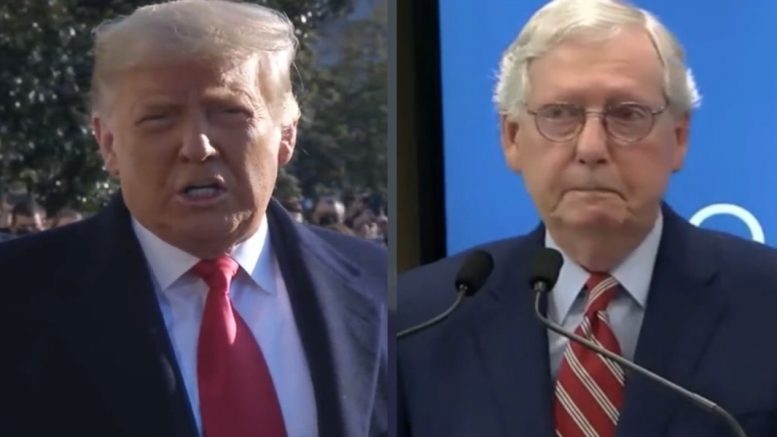 45th President Donald J. Trump urged Republicans to pick a new Senate leader and accused Senator Mitch McConnell (R-KY) of being a “pawn for the Democrats.”

In a statement on Truth Social and via email from his “Save America” PAC on Wednesday, Trump included an article written by Jordan Boyd at The Federalist regarding McConnell and his wife Elaine Chao’s alleged ties to China, titled: Trump Is Right. Mitch McConnell And Elaine Chao Spent Decades Getting ‘Rich On China’.

The Democrats have Mitch McConnell and his lovely wife, Elaine ‘Coco’ Chao, over a barrel. He and she will never be prosecuted, as per the last paragraphs of this story, as long as he continues to give the Radical Left the Trillions and Trillions of Dollars that they constantly DEMAND.

He was afraid to use the ‘Debt Ceiling Card’ in order to stop the most expensive waste of money in our Country’s history, to be spent on the Green New Deal, which will only cause one thing, a Depression. These expenditures are something our Country can never recover from.

Mitch McConnell is not an Opposition Leader, he is a pawn for the Democrats to get whatever they want. He is afraid of them, and will not do what has to be done.

A new Republican Leader in the Senate should be picked immediately!

This isn’t the first time Trump called for Republicans to select a new Senate leader. “I think we’re going to do very well,” he told Fox Business’ Maria Bartiromo last year in regards to 2022 elections. “We need good leadership. Mitch McConnell has not done a great job — I think they should change Mitch McConnell.”

Senator McConnell recently played down the chances that his party would win the Senate back in November. “I think there’s probably a greater likelihood the House flips than the Senate,” he said in Florence, Kentucky, at a Northern Kentucky Chamber of Commerce luncheon when asked about his projection for the 2022 election, as previously reported by The Freedom Times.

Trump reacted Saturday, writing on Truth Social: “Why do Republicans Senators allow a broken down hack politician, Mitch McConnell, to openly disparage hard working Republican candidates for the United States Senate. This is such an affront to honor and to leadership. He should spend more time (and money!) helping them get elected, and less time helping his crazy wife and family get rich on China!”