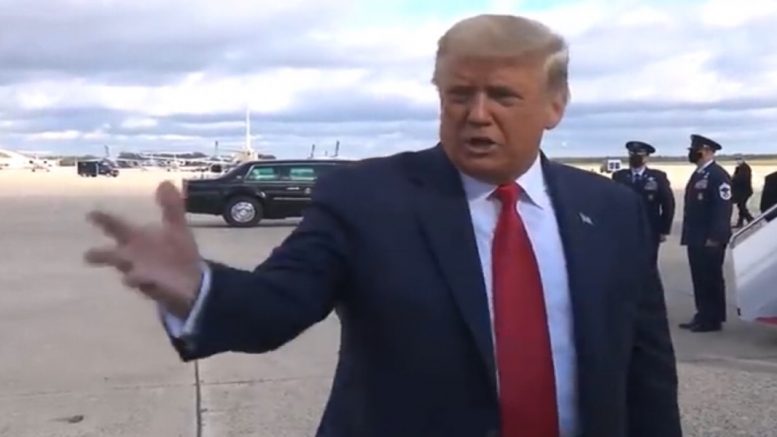 45th President Donald J. Trump issued a statement Thursday announcing that he is preparing a response to the FBI raid of his Mar-a-Lago home earlier this month.

“A major motion pertaining to the Fourth Amendment will soon be filed concerning the illegal Break-In of my home, Mar-a-Lago, right before the ever important Mid-Term Elections,” Trump wrote on his Truth Social account.

“My rights, together with the rights of all Americans, have been violated at a level rarely seen before in our Country. Remember, they even spied on my campaign. The greatest Witch Hunt in USA history has been going on for six years, with no consequences to the scammers. It should not be allowed to continue!” President Trump declared. 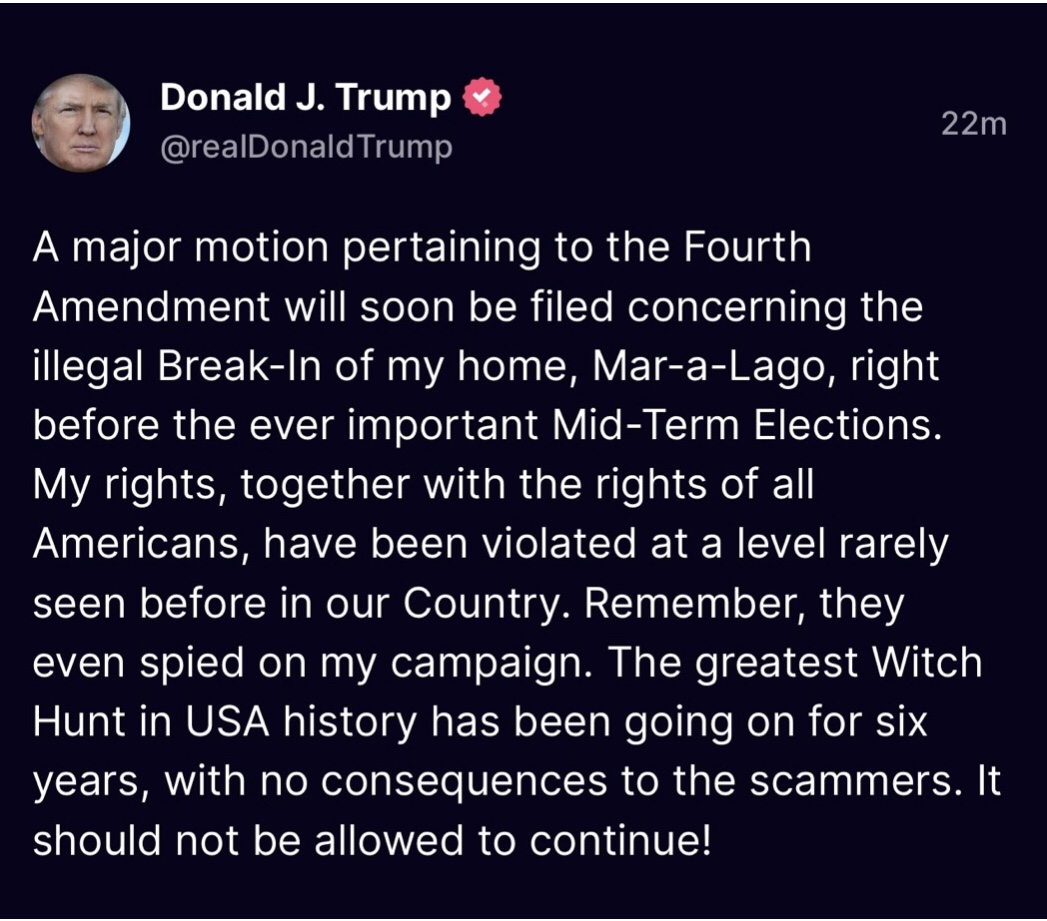 Fourth Amendment Search and Seizure — The right of the people to be secure in their persons, houses, papers, and effects, against unreasonable searches and seizures, shall not be violated, and no Warrants shall issue, but upon probable cause, supported by Oath or affirmation, and particularly describing the place to be searched, and the persons or things to be seized.

Attorney General Merrick Garland admitted on August 11 that he “personally approved” the decision for the Mar-a-Lago FBI raid, claiming there was “probable cause“.

The seven-page warrant that authorized the FBI was unsealed on August 12th by Magistrate Judge Bruce Reinhart. Trump is under investigation for alleged violations of 18 USC 2071 — concealment, removal, or mutilation; 18 USC 793 of the Espionage Act—gathering, transmitting, or losing defense information; and 18 USC 1519 — destruction, alteration, or falsification of records in federal investigations, as previously reported The Freedom Times.

Responding to the warrant being unsealed, Trump wrote on Truth Social August 12, “Number one, it was all declassified. Number two, they didn’t need to ‘seize’ anything. They could have had it anytime they wanted without playing politics and breaking into Mar-a-Lago. It was in secured storage, with an additional lock put on as per their request. They could have had it anytime they wanted—and that includes LONG ago. ALL THEY HAD TO DO WAS ASK.”

Judge Reinhart on Thursday said he may be willing to unseal portions of an affidavit used to apply for the search warrant for 45th President Trump’s Mar-a-Lago home in Palm Beach, Florida, however, he ordered Justice Department officials to suggest redactions to the document by August 25, as previously reported by this publication.

Reinhart said he believes the DOJ has not sufficiently shown that the document should remain entirely secret. “I find that on the present record the Government has not met its burden of showing that the entire affidavit should remain sealed,” Judge Reinhart said in a brief order.

President Donald Trump had called for the affidavit to be unsealed without redactions in a statement on Truth Social Monday evening.

“There is no way to justify the unannounced RAID of Mar-a-Lago, the home of the 45th President of the United States (who got more votes, by far, than any sitting President in the history of our Country!), by a very large number of gun toting FBI Agents, and the Department of ‘Justice’ but, in the interest of TRANSPARENCY, I call for the immediate release of the completely Unredacted Affidavit pertaining to this horrible and shocking BREAK-IN, Trump wrote, adding, “Also, the Judge on this case should recuse!”

In a separate post on Thursday, Trump said, “When will people realize that the atrocities being perpetrated by the FBI and DOJ having to do with the Raid and Break In of my home, Mar-a-Lago, or after years of other atrocities and unthinkable violations of freedom and the law, this has been going on for years, from the moment I came down the golden escalators in Trump Tower, right up until the present.”

“At some point you have to look at what took place in the past to determine what is going on in the present and nothing has ever happened like that which is going on in our Country right now,” he continued.

“The law enforcement of our Country has become that of a Third World Nation, and I do not believe the people will stand for it—between Fraudulent Elections, Open Borders, Inflation, giving our Military to the Enemy, and so much more—how much are we all expected to take?” Trump wondered.

“Never in our Country’s history has there been a time where law enforcement has been so viciously and violently involved in the life and times of politics in our Nation,” Trump wrote in another post on Thursday.

“They have no shame. They are destroying our Country!” the 45th President expressed.

Related: Trump Suggests FBI Could’ve Planted Evidence During Mar-a-Lago Raid Because ‘Everyone was Asked to Leave the Premises’