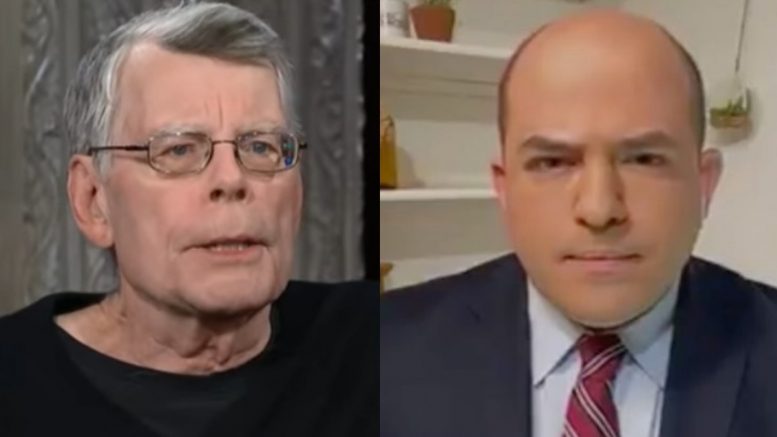 American horror author Stephen King appears to be frustrated after learning of CNN’s decision to cancel the Sunday morning program “Reliable Sources,” which led to the departure of longtime liberal TV anchor Brian Stelter who hosted the program.

“Brian Stelter, the host of CNN’s Sunday morning show “Reliable Sources,” is leaving the network following the cancellation of the long-running media news program,” the network said Thursday, according to a report by the Wall Street Journal. “Mr. Stelter, who is also the network’s chief media correspondent, will anchor his last episode on Sunday, a CNN spokesman said in a statement. The show’s last edition will be this Sunday Aug. 21.”

Related Article: Stelter Gets Ripped As ‘Fake News’ by His Own Guest: ‘You Are One of the Reasons Why People Can’t Stand the Media’

“The one show on CNN I never missed was Reliable Sources, with Brian Stelter,” the Pet Semetary author tweeted. “It has been an invaluable window into how the media covers…itself. Today CNN canceled it.”

The one show on CNN I never missed was Reliable Sources, with Brian Stelter. It has been an invaluable window into how the media covers…itself. Today CNN canceled it.

Major changes were expected at CNN when longtime TV executive Chris Licht took over and signaled efforts to restore a less opinionated reputation to the network and improve programming – and the sudden exits of Jeffrey Toobin and now Brian Stelter appear to be putting his vision in place.

Less than a week after Toobin’s exit, the network announced Thursday that Stelter, the “Reliable Sources” host derided by conservatives for years as a “janitor” for liberal and mainstream media, was out. He’ll air one more show on Sunday.

The writing had been on the wall since high-powered media executive John Malone, a Warner Bros. Discovery board member who mentored CEO David Zaslav, declared last year CNN should revert to nonpartisan journalism once the liberal network was under the Discovery umbrella. Months later, on the heels of Zucker’s being forced out ahead of the long-planned merger, Stelter accused Malone of “not watching CNN directly” and relying on talking heads and columnists who complain about the network.

Stelter’s fate had long been sealed.

The day Licht was announced as CNN’s new chief in February, everyone around him knew Stelter was toast, a media insider told Fox News Digital. Those in his orbit had been expecting Stelter to be fired because Licht had complained to peers about the show being bad television. In axing Stelter, Licht’s desires to tack the network back to the middle and purge unexceptional broadcasters overlapped.

Stelter issued a statement on Twitter hours after news broke of his departure. We leave you with his tweet:

We're going to do it one more time. One more show. This Sunday morning. The small but mighty producing team is working on bookings and ideas right now. I am in awe of their talent and I am going to do everything I can to help them find new roles. See you Sunday at 11am ET.