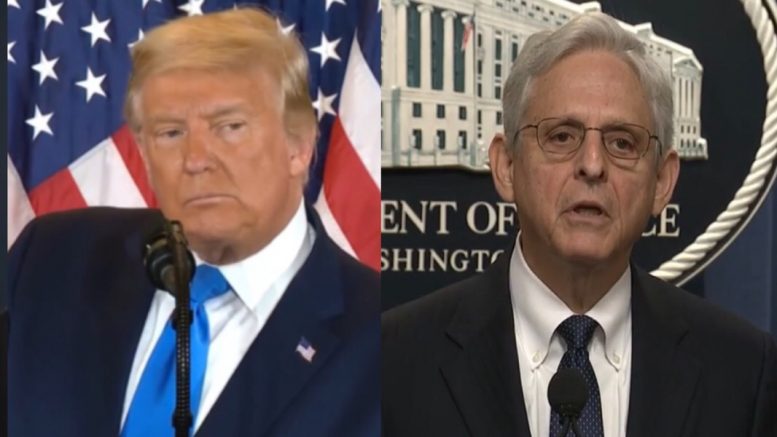 Attorney General Merrick Garland announced on Thursday that he “personally approved” the decision for the Monday FBI raid at 45th President Donald Trump’s Mar-a-Lago estate in Palm Beach, Florida, claiming there was “probable cause” for the search, however, he did not provide specific details into the matter.

Garland also said that the Department of Justice “will speak through its court filings and its work”, adding, “Just now, the Justice Department has filed a motion in the Southern District of Florida to unseal a search warrant and property receipt according to a property search that the FBI conducted earlier this week”.

Garland alleged that copies of the warrant and property receipt were provided were provided on the day to President Donald Trump’s counsel who was “on site during the search”.

“The search warrant was authorized by a federal court upon the required finding of probable cause. The property receipt is a document that federal law that requires law enforcement agents to leave with the property owner. The Department filed the motion to make public the warrant and receipt in light of the former president’s public confirmation of the search, the surrounding circumstances, and the substantial public interest in this matter,” Garland said.

“All Americans are entitled to the evenhanded application of the law, the due process of the law, and to the presumption of innocence,” the attorney general noted, before saying that he could not going into detail of why the search was conducted.

“I personally approved the decision to seek a search warrant in this matter,” he admitted.

Conservative watchdog group Judicial Watch also announced that it has filed a motion on August 9th asking the U.S. District Court for the Southern District of Florida to unseal as soon as possible the search warrant materials used by the FBI to raid President Trump’s Mar-a-Lago home in Florida (U.S. v. Sealed Search Warrant (Case No. 9:22-mj-08332)).

In its motion Judicial Watch states in part, “Judicial Watch is investigating the potential politicization of the Federal Bureau of Investigation and the U.S. Department of Justice and whether the FBI and the Justice Department are abusing their law enforcement powers to harass a likely future political opponent of President Biden.”

The order notes that, “The response may be filed ex parte and under seal as necessary to avoid disclosing matters already under seal. In that event, the Government shall file a redacted Response in the public record.”

The Albany Times Union and the New York Times have joined Judicial Watch in filing for the unsealing of the warrant by filing an amicus letter and motion respectively.

Due to multiple organizations filing to unseal the warrant, Judge Reinhart further ordered that, “To avoid the need for individualized orders on any future motion(s) to unseal, it is ORDERED that the Government shall file an omnibus response to all motions to unseal on or before 5:00 p.m. Eastern time on August 15, 2022.”

According to media reports, the warrant relates to an alleged dispute over the Presidential Records Act.