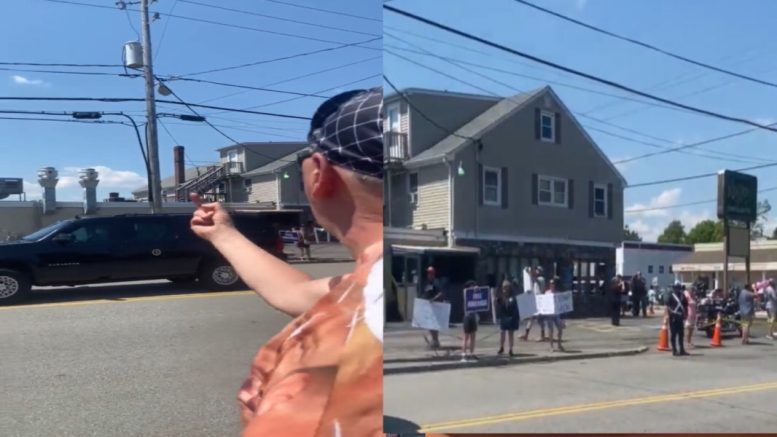 Residents in Somerset, Massachusetts greeted 79-year-old Joe Biden on Wednesday with chants of “Let’s go, Brandon!” as the Democrat career politician made a visit to the Bay State to give a pre-scripted speech over climate change.

Protesters were seen lined up along a street in video footage, holding signs and chanting as Biden’s motorcade drove by.

One protester can be seen giving Biden a one-fingered salute in the video clip below:

The phrase “Let’s go, Brandon” became popular after an NBC reporter made an attempt at damage control last October when “F**k Joe Biden!” chants erupted on live TV at a NASCAR event, as previously reported by The Freedom Times.

Spectators could be heard chanting “F**k Joe Biden!” loud and clear in the background. The reporter, however, suggested the fans were yelling, “Let’s Go, Brandon!”, which obviously wasn’t the case. Video Below

Related: Biden: ‘That’s why I & so Damn Many Other People I Grew up With Have Cancer’

Leo Terrell to Joe Biden: ‘Other Than Embarrassing Yourself & America, What did you Accomplish Visiting Saudi Arabia?’