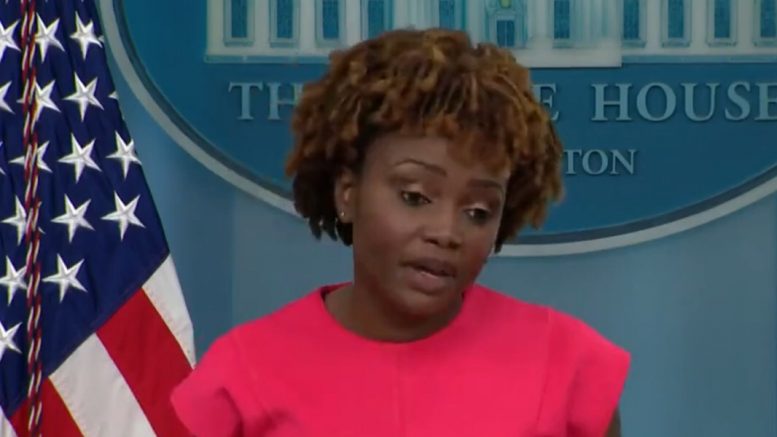 White House press secretary Karine Jean-Pierre claimed on Monday that Americans are feeling “relief” at the gas pumps due to “the work” the Biden administration has done and “will continue to do” as the national average for a gallon of gas is at $4.52 according to AAA, compared to $4.98 last month.

Last month, Joe Biden called for suspending the federal gasoline tax, asking lawmakers to pass a three-month pause on the federal 18-cent-per-gallon levy. He also urged individual states to suspend their own gas taxes and for gas stations owners to lower their prices.

“We’re not doing a victory lap, but this is important to note that the work that we have done, the work that we will continue to do, is going to give relief — $25 a month to American families,” White House press secretary Karine Jean-Pierre claimed.

Most recently, 79-year-old Joe Biden traveled to Saudi Arabia last week to beg for increased energy production from the Middle Eastern nation. Saudi Crown Prince Mohammed Bin Salman told Biden that “Saudi Arabia is about tapped out, and if President Biden or anyone else wants Saudi Arabia to expand its oil production capacity much more, it’s not gonna happen”, reported Fox News White House correspondent Peter Doocy. “13 million barrels is going to be the max. … They’re already at about 12 million barrels as the max capacity”.

The White House press secretary deflected when asked, “Aren’t [gas prices] still $2 a gallon higher than when you guys took office though?”

KARINE JEAN-PIERRE: "First of all, we have to look at the imp—how we got there, right?" pic.twitter.com/aouFMTdusE

REPORTER: "When the gas prices go up, it's got nothing to do with the president. When we see some decline, you want him to get the credit!"

Biden Economic Adviser: "I very much disagree with that framing." pic.twitter.com/07VsduE1JK

"Let me ask you to focus on what we're trying to talk about today." pic.twitter.com/BhClBa795V