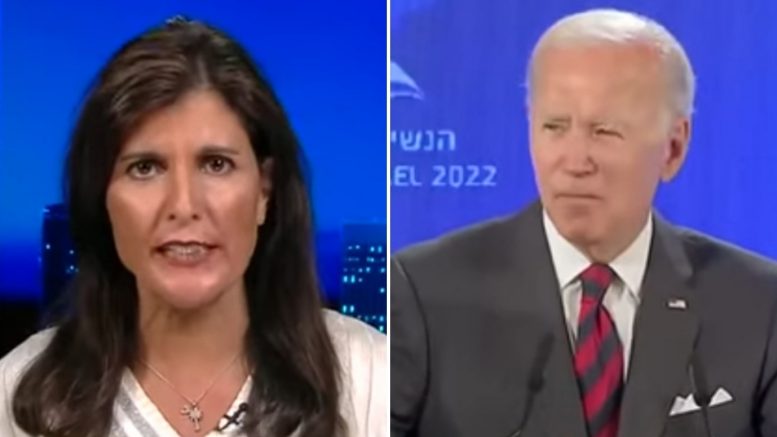 Nikki Haley dropped a warning on Joe Biden on Saturday over his “nieve” foreign policy approach when it comes to preventing Iran from acquiring nuclear weapons.

On Thursday, Biden and Israeli Prime Minister Yair Lapid signed a joint pledge to deny Iran nuclear arms, where the two leaders shared a difference in a opinion over whether diplomacy is a viable option to neutralize Iran.

Speaking with the press, Biden said that he continues to believe that “diplomacy” is the “best way” to neutralize Iran, while Mr. Lapid suggested “words” and “diplomacy will not stop” Iran from developing a nuclear program.

In her reaction to the latest developments, Nikki Haley — who served as U.S. ambassador to the United Nations under President Donald Trump — warned Biden that he should listen to his Israeli counterpart in regards to Iran.

“It’s amazing how nieve Biden is acting. I mean, America is too nice… too nice! Stop being nice to these thugs and these tyrants who want to kill us,” Haley told Fox News host Brian Kilmeade.