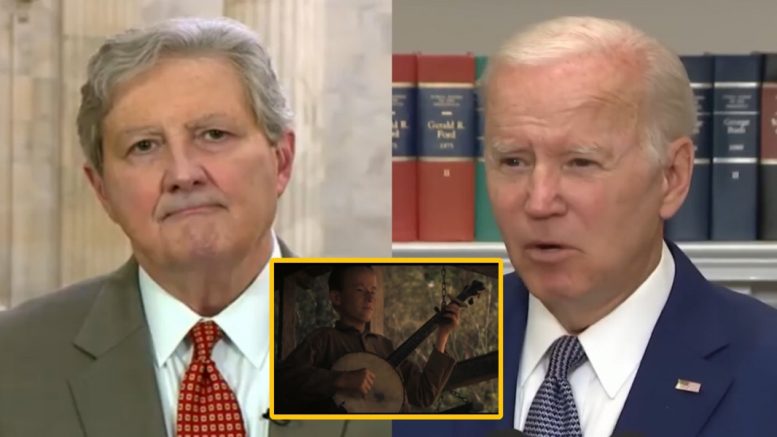 Senator John Kennedy (R-KY) told Fox News’ Sean Hannity that Joe Biden is “struggling” like “an old Buick” and is less popular than the “creepy banjo kid” from the movie “Deliverance”.

His assertion comes as Biden is failing to get inflation under control and for mismanaging several policies under his watch.

“Well, President Biden is clearly struggling. He struggled today in the Middle East and I take no joy in that. I trust the American people, and I think the American people have figured things out. I don’t consider myself an expert in too many things, if any, but I know how to read a poll,” Senator Kennedy said.

“A majority of Americans, to them, the president is about as popular as cholera. The American people didn’t just reach this conclusion this morning. They have reasons for believing that. Number one, the majority of Americans don’t believe that President Biden is in charge,” he told Hannity.

“Number three, a majority of Americans think that the people President Biden has appointed to run his government – are deeply weird. And, they are. Many of these appointees, they curl up in a protective ball if you use the wrong pronoun. They pride themselves on not prosecuting criminals. Their executive skills extend no further than ordering a pizza,” he quipped.

“Inflation is waterboarding the American people. The people are scared they’re not going to be able to retire until they are 92. Their 401K’s are crashing,” he continued.

“The creepy banjo kid in Deliverance is more popular than the president at the moment, and he better reverse direction soon, Sen. Kennedy said, referring to the scene in the film with the dueling banjos.

A new poll conducted has found that 64% of Democratic voters do not want 79-year-old Joe Biden to run again in 2024 as his overall approval rating has sunk to a mere 33%.

The results of a New York Times/Siena College poll of 849 registered voters nationwide during July 5-7 also found that 94% of Democrats under age 30 are looking for a different nominee, and just 13% of poll respondents say the country is on the right track.

Of the issues being the most important to all voters, 20% listed jobs and the economy, followed by 15% saying their top concern is inflation and the cost of living.

Only 6% of a large swath of the working class — those aged 18 to 64 years old — told pollsters that the economy is in good or excellent condition, compared to 93% who rated it poor or fair, according to The New York Times.

Related: Sen. Kennedy: ‘The Price of Gas Is so High that It Would Be Cheaper to Buy Cocaine & Just Run Everywhere’