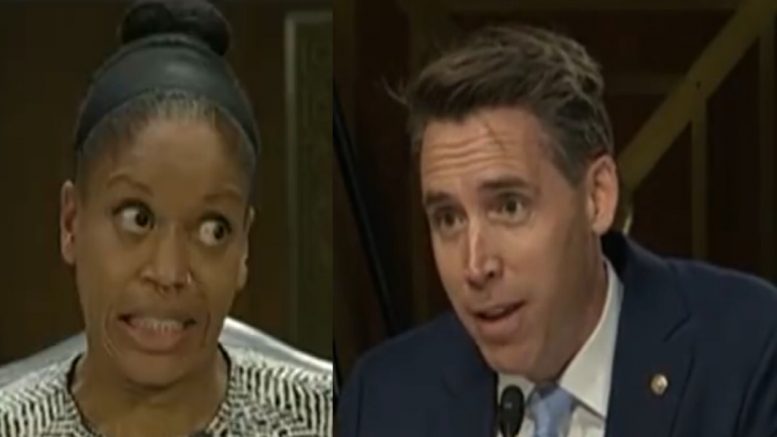 Senator Josh Hawley (R-MO) was accused on Tuesday of asking a “transphobic” line of questioning by Berkeley, California law professor Khiara Bridges during a Senate Judiciary Committee’s hearing on the overturning of Roe v. Wade.

Hawley asked Bridges why she had repeatedly referred to “people with a capacity for pregnancy,” to which she claimed that the overturning of Roe v. Wade also impacts trans men and non-binary Americans who can get pregnant.

“I want to clear one think up. Professor Bridges, you said multiple times — you used the phrase I want to make sure I understand what you mean by it. You referred to people with the capacity of pregnancy — would that be women?” Senator Hawley asked the law professor.

“So this really isn’t a women’s right issue,” Senator Hawley noted, before the California professor interrupted the Missouri lawmaker.

“We can recognize that this also impacts women, as well as recognizing it impacts other groups. Those things are not mutually inclusive,” she said. Continued Below

Bridges told Sen. Hawley that she wanted to “recognize that your line of questioning is transphobic and it opens up trans people to violence.”

Hawley pushed back on her assertion and statement that Hawley is “pretending [trans people] don’t exist,” saying, “Wow. You’re saying I’m opening up people to violence by asking whether or not women are the folks who can have pregnancies?”

She also asked the Missouri Senator if he believed men can get pregnant, to which Hawley said “no”. In response, Bridges claimed his answer meant, “You’re denying that trans people exist”. Video Below

Senator Hawley tweeted a video clip of the exchange with Professor Khiara Bridges, writing: “The Democrats say what they really think: men can get pregnant and if you disagree, you are ‘transphobic’ and responsible for violence. For today’s left, disagreement with them = violence. So you must not disagree”.

For today’s left, disagreement with them = violence. So you must not disagree

Senator Hawley added: “According to today’s Democrat party, if you believe that only women get pregnant, you are a bigot and responsible for violence”.

According to today’s Democrat party, if you believe that only women get pregnant, you are a bigot and responsible for violence https://t.co/zaknx7iWTy

Hawley and Bridges’ exchange reflects a broader debate that’s been playing out—including among those who support abortion rights—over whether to refer to abortion as impacting “women” or “people” as the issue dominates the national conversation.

Numerous Democrats and advocacy groups have embraced the term “pregnant people” to be more inclusive of the LGBTQ community, with the ACLU noting that using more restrictive wording “excludes people from our understanding of abortion rights, rather than expanding it.”

Some have pushed back on that, however, with New York Times op-ed writer Pamela Paul claiming using people instead of women means “women don’t count.”