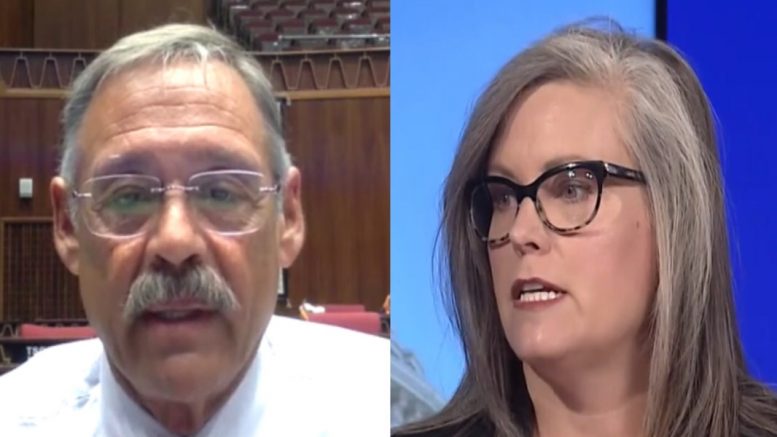 Pinal County officials said Friday that they will be mailing supplementary ballots with city and town races after an estimated 63,000 early ballots with errors were sent to voters ahead of the August 2 primary election.

Following the news of the massive error, State Representative Mark Finchem said that Arizona Secretary of State Katie Hobbs “should” resign for her failure to uphold election integrity in the Grand Canyon State.

Ballots in Superior, Maricopa, Casa Grande, Eloy and Mammoth, as well as the Pinal County portions of Apache Junction and Queen Creek, were sent out this week without city and town contests printed on them, according to Pinal County spokesperson James Daniels. The contests erroneously appeared on ballots sent to voters in nearby unincorporated areas who are not eligible to vote in the municipal races, he said, Sasha Hupka at AZ Central reported.

The issue comes amid intense scrutiny of election officials in the aftermath of the Maricopa County forensic audit report of the 2020 presidential election and Arizona’s attorney general offering an update to Senate President Karen Fann on his agency’s review of the findings.

AZ AG Mark Brnovich said in April his Election Integrity Unit (EIU) “uncovered instances of election fraud by individuals who have been or will be prosecuted for various election crimes”.

Reacting to the 63,000 early ballots with errors, Arizona Secretary of State candidate Mark Finchem told Steve Bannon in a Monday interview, “You can’t make this stuff up. Pinal County mailed out their mail-in-ballots with no municipal offices on the ballots. None. … It was approved by the Board of Supervisors … the elections director, and Miss Perfect herself, Katie Hobbs.” Continued Below

Steve Bannon, host of “War Room”, asked Rep. Finchem, “Should [Hobbs] resign immediately as secretary of state? The buck stops with her. Is that correct Mark Finchem?”

“That’s my opinion,” he replied. “But we still have a general election. It has become such a mess, such a go rodeo that I’m not really sure how we unwind this. Of course, there’s a recovery plan the Board of Supervisors are putting together.”

“That’s not the point. This is a major screwup. And if we had a secretary of state who is on the ball, who is process orientated, who went through the checklist and made sure everything is done on the ballot the way it should be on the ballot — if you held the Board of Supervisors and the elections director and the county reporter accountable for the law, because this is violation of the law — you’d maybe be able to restore faith in the American people’s mind,” Finchem said. Video Below

Asked directly if Arizona Secretary of State Katie Hobbs should resign “immediately”, the Arizona state representative told Bannon, “I think she should”.

Finchem also tweeted a picture of a Pinal County ballot that did not have a municipal office on it, calling it “unacceptable behavior and performance”.

The Secretary of State, Katie Hobbs, signed off on the Pinal County ballots that did not have municipal offices on them. This is unacceptable behavior and performance. pic.twitter.com/bfhYjLLscu