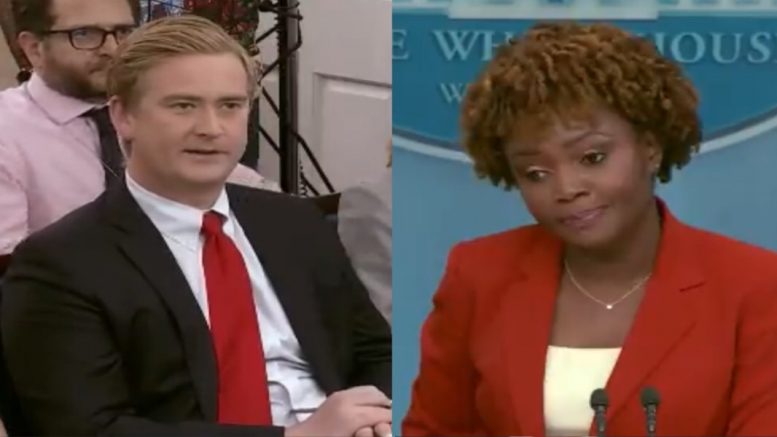 Fox News White House correspondent Peter Doocy on Thursday asked  press secretary Karine Jean-Pierre why does she think 88% of people thinks the country is on the wrong track.

Nearly 9 in 10 Americans say the country is headed on the wrong track, according to a survey from Monmouth University Poll released on Tuesday. The survey found that just 10 percent said the country is headed in the right direction — an all-time low since the pollster began asking the question in 2013 — while 88 percent said it is on the wrong track, Zach Schonfeld a staff writer at The Hill reported.

“Why do you think it is, that 88% of people in this country, polled by Monmouth, think the country is on the wrong track?” Doocy asked the White House press secretary Thursday.

Karine Jean-Pierre claimed that Joe Biden “understands what the American people are going through”, further alleging, “He understands that gas prices are high because of [Vladimir] Putin’s tax hike, because of the war. … And also the food insecurity, the food cost has skyrocketed”.

“That’s why the president has done everything he can to blunt those high prices. That’s why he’s tapped into the strategic petroleum reserves”, she said, without mentioning that according to a Reuters report, more than 5 million barrels of oil  were exported to Europe and Asia last month, as previously reported by The Freedom Times.

Doocy to Karine Jean-Pierre: "Why do you think it is, that 88% of people in this country … think the country is on the wrong track?" pic.twitter.com/WSARM1WTvI

Doocy further asked the White House press secretary if she thinks “it’s possible that your plan is just not popular with the American people right now?”

Doocy to Karine Jean-Pierre: "Do you think it's possible that your plan is just not popular with the American people right now?" pic.twitter.com/spk5ncqftZ

Trump on Inflation Suring to 9.1% Under Biden Admin: ‘How can People Survive This?…America will not Allow This to go on for Much Longer’